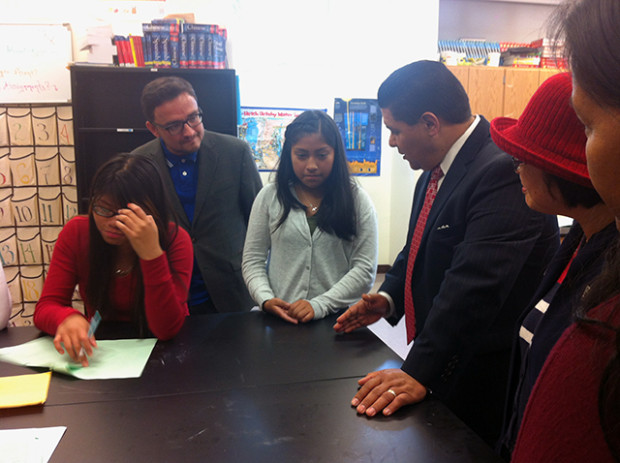 On her first day of classes at San Francisco International High School, Jennifer Chavac, an 11th grader, was busy. This is her third year at this school and she’s proven to be a dedicated student. Today, she was in charge of showing City and School District officials what her Science class is like.

Her most important task, however, was serving as a role model for the young immigrant students appearing for their first day of classes—a number that has jumped with the recent increase in unaccompanied minors coming into the United States. The Los Angeles Unified School System expected more than 1,000 new immigrant students, according to the LA Times and the same story estimated that 60,000 unaccompanied minors will be absorbed in school systems across the country.

The entry on the first day of school begins in the most mundane of ways.

“Today is about finding your way around because some teachers don’t have homerooms yet,” Chavac said.

SFIHS opened in 2009 with 37 students and during the school year of 2012-2013, the school had 326 students enrolled. All of the students are recent immigrants and learning English as a second language. The maximum capacity of the school is 400. The school has seen a 25 percent increase in unaccompanied minors enrolling in the last six years—a group that the school has accepted since its inception.

Superintendent Richard Carranza warned that the number of unaccompanied children is surpassing the capacity of schools in San Francisco and that around 150 or more students will be enrolling at other high schools in the city. However, the School District has hired…