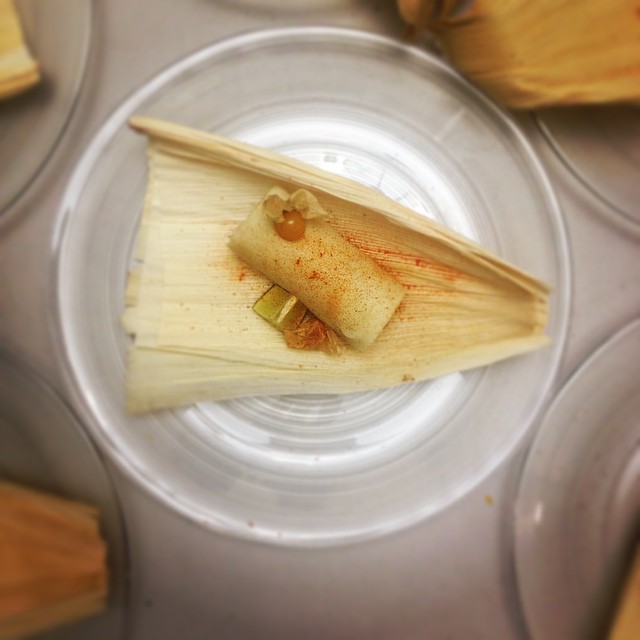 t was once written that food had replaced art as high culture. Chef Gabriel Moya, along with childhood friends Efren Candelaria, Felipe Cabrera and Mayra Estrella, believe differently. The urban culinary rebels have created their own take on culture, one that revolves not only around food but also around music, art and the welcoming space to create that magical moment—a human connection. Known as Sobremesa Supper Club, the vegetable forward, Latin inspired, multisensory fine dining experience is both underground and unpretentious, and is just what Chicago needs.
Moya, raised by Argentine/Puerto Rican parents, obtained his gourmet education at the Culinary Institute of America. He believes his teenage trips to South America, where he learned about new flavors, ingredients and techniques, greatly influenced his taste palette and the choices he now makes when presenting a dish.

“As a society, we’ve gone wrong with our excess of meat and its products. It’s our responsibility to make our efforts sustainable and make use of what’s available to us,” explains Moya.

As the menu solidified, Moya began to nurture relationships with surrounding farms and food providers. He became familiar with Green City Market, where farmer meets foodie. He also became familiar with the wooded areas on the outskirts of town where they forage for whatever’s available, usually ramps and wild garlic. “I was used to having access to any kind of food I wanted in New York. Here, in winter, there’s nothing growing outdoors and our choices are extremely limited. But we take pride in what we do and work with what nature has to offer,” says Moya.

The nomadic dining club began and that pride beautifully exploded in the form of dishes presented as fine works of art, carefully and delicately plated. It takes precision to roll thin slices of root vegetables into mini forests or twirl fine strands of wild herbs into soft tussles floating over complex sauces, jams and creams. There are upscale versions of basics like carrots, peas and corn as well as surprises like a new take on beans and rice, which are neither beans nor rice. Green strawberries, crisp plantains, sweet and sour berries, grilled sunchokes and mustard seeds create colorful, flavorful landscapes.

“We have to worry about details because there’s plenty of great food in this city. The details we take time and pride in, that’s what makes us stand out,” says Candelaria, the group’s artistic director. As the nomadic idea took off and their list of fans grew, they realized their pop up dinners should…