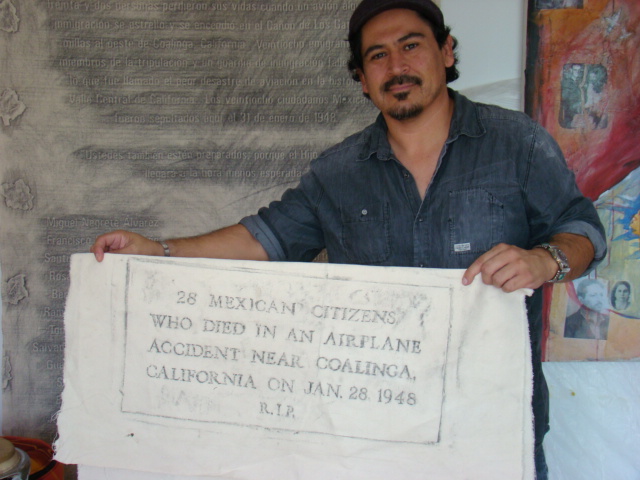 EL PASO — Folksinger Woody Guthrie wrote a poem In 1948 about a plane crash that year in which 32 people lost their lives near Los Gatos Creek in the Diablo mountain range of California. The flight was carrying 28 migrant farmworkers who were being deported back to Mexico.

Guthrie was disturbed by press accounts at the time that didn’t include the names of the passengers.

The poem was eventually set to music and was popularized by Pete Seeger as “Deportees,” which included the haunting line: “to fall like dry leaves to rot on my topsoil, and be called by no name except “deportees.”

Sixty-six years later, writer Tim Z. Hernandez has made it his mission to remember those whose lives were lost by finding out their names.

In 2010, while doing research for his book Mañana Means Heaven, Hernandez, a native of California’s San Joaquin Valley who comes from a migrant farmworker family, came across a headline that read “100 People See An Airplane Fall From The Sky.”

As he continued to read about the incident, Hernandez realized that this plane crash and the crash mentioned in Guthrie’s song were one and the same.

“When I learned that this took place in my backyard, Fresno County, where I’m from, I said I wonder what happened to the people,” Hernandez said.

Hernandez was struck by the fact that only the four members of the the plane crew were named in the article, even though 28 other people died. The Mexican farmworkers – of which only a few actually were illegal immigrants – were collectively referred to simply as deportees.