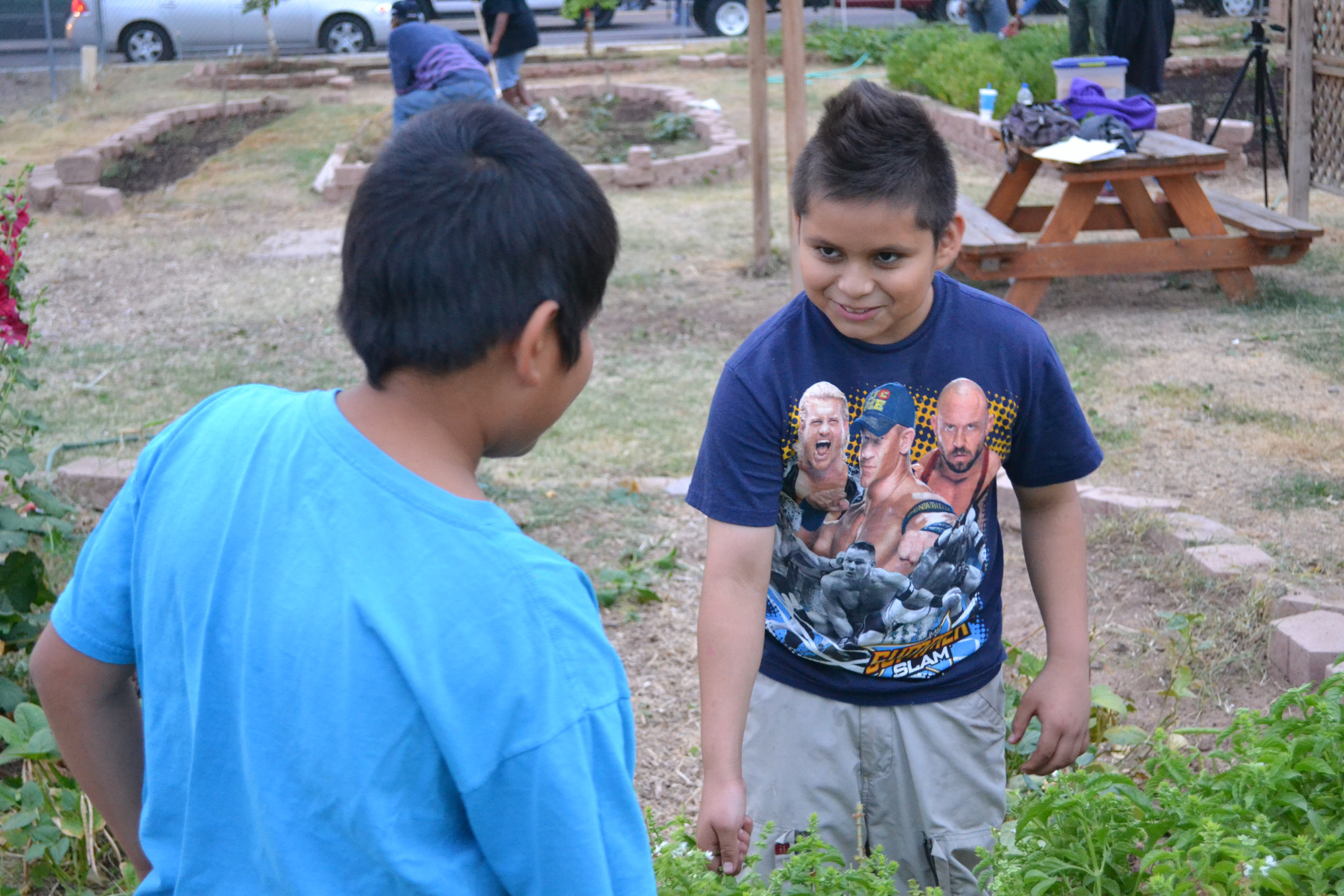 PHOENIX – On a one-acre plot in the middle of an industrial area, the smell of freshly picked basil fills the air as kids run through rows of radishes, eggplant, peppers and mustard greens, pausing occasionally to help adults weeding this community garden.

This is the exact kind of afternoon that founder Darren Chapman imagined in 2007 when he launched the Tiger Mountain Foundation and broke ground on the nonprofit’s first community garden in south Phoenix.

“I really wanted to see something come up, sprout up, that would bring affordable, accessible, nutritious produce back into our community,” Chapman said.

Over the years, the number of gardens grew to four, and the group’s focus increased on changing the future for kids who were on unhealthy paths.

“We saw a lot of kids coming out of our community who were morbidly obese. They were kids who just didn’t know any better,” Chapman said.

“Their reward for doing well each day was a grape soda,” he added. “The kid becomes addicted to the sugar fix. Obesity was a natural result of what our environment presented to us.”

Chapman said that lots of people in the community don’t have cars and, with the closest grocery store often a mile or more away, residents turn to nearby convenience stores that sell mostly junk food and sugary drinks.

“There is very little accessibility to healthy food in this community aside from what we try to do with these gardens,” Chapman said.

But the gardens mean a lot more to the community than just a place to get fresh produce. They have become an after-school gathering spot for the neighborhood kids.

“We have quite a few of our youth who actually have transitioned themselves into being in better shape after being involved with the garden,” Chapman said. “Why not have youth be exposed to nutritious produce that actually changes their life story.”

Adults have gotten involved too. Volunteer Mary Johnson said her health has improved since adding fresh fruits and vegetables to her daily diet.

It’s not just about being around fruits and vegetables, according to garden employee James Hudson. The foundation educates kids about ways to make better choices for a lifetime.

“We have people who come out here to teach the kids about healthy living. That’s what this garden is all about – healthy eating and organic food,” he said.

Every second Saturday at the original garden, “The Garden of Tomorrow,” Tiger Mountain hosts a day of healthy eating, education and entertainment, all kicked off with an “active-lifestyle walk” in the morning.

Caesar Tapia, one of the garden’s youth program members, said he and others enjoy the education and transition to healthier eating.

“I like to check to see if there’s a good watermelon or fruit to take from the garden for lunch,” he said.

For Chapman, it’s not about depriving the kids or telling them they have to give up their favorite treats. It’s about getting them connected to where their food comes from and showing them the benefits of living a healthier lifestyle.

“It’s hard to compete against big sugar drinks in the soft drink industry, so we don’t even really consider ourselves so much a competition, we just want to give the kids an alternative of healthier living in their community and we see a lot of buy-in from the youth.”

“When kids get out of school they can come and work in the garden, and it’s a really good thing to do because it keeps them out of trouble, he said. “And that’s good because trouble is easy to get in but hard to get out of.”

“I’d rather see a person out here digging in the ground, than have a grave dug for them,” said Mary Johnson, another garden volunteer. “Rather than pick up a pistol, pick up a vegetable.”

After seeing the positive impact that these gardens have on the community, Darren Chapman can’t imagine his neighborhood without them.

“It would be on a cataclysmic level if we aren’t able to continue this because it’s a message for youth to be healthier and to live a healthier lifestyle,” he said. “That ounce of prevention will be exactly what these communities need to start reversing the tide.”

(Featured Photo: Caesar Tapia, at right, one of the garden’s youth program members, said he and others enjoy the education and transition to healthier eating. Cronkite News Service Photo by Amy Gleich)