Latina Lista: News from the Latinx perspective > Local News > South > Playing with the Lottery of the Dead

Playing with the Lottery of the Dead 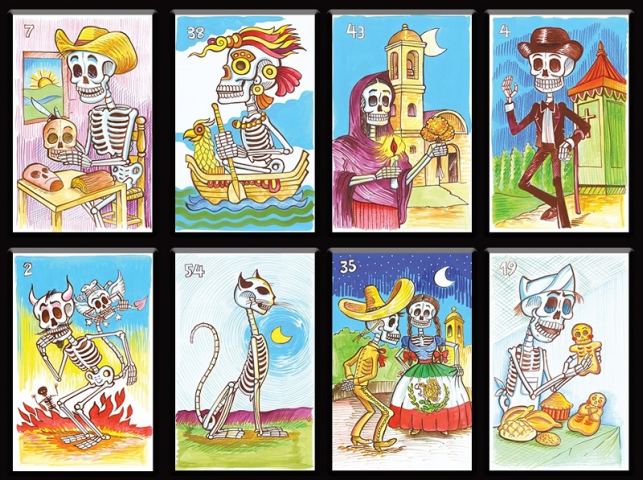 SAN ANTONIO — Something is certain: In this lotería game, you're always going to touch the skeleton. And to see for yourself, you can visit the "Lotería de los Muertos" exhibit by Mexican painter Leonardo Peralta Phillips at the Autonomous University of Mexico located at San Antonio's Hemisphere Plaza.

In this exhibit of 54 images, Phillips combines two traditions of Mexico: the iconic game of lotería and the cult that surrounds death represented in each image.

"The objective is for the children, young people and adults who see the exhibit to smile, you know that a sense of humor and to smile at life is a necessity…and you know that in Mexico we laugh at everything, unitl death," said Phillips.

This is how the classic figures of the traditional lotery game is represented in Phillips' version, like "El Dandy," "El Gallo," and "La Calavera." Behind the skeletal image, Phillips creates new personalities for his personal game.

For example, "El Tamalero," "El Camotero," "El Tlacuilo" make their appearance in this version. There's also a "Fat skeleton eating a sandwich," he said "and an old skeleton of Aztec origin – Señor de la Tierra de los Muertos, "who is the grandmother of La Catrina," explained the author.

The exhibition also includes some watercolors that belong to another exhibition entitled "Our Roots", where Phillipps takes motifs of indigenous cultures of Mexico. One example is entitled "Profile from Mexico".

This collection of acrylic watercolors was created some years ago in San Francisco, the author says. From these, he created some greeting cards that had to do with the lottery.  By next year, Leonardo Phillips plans to print out the watercolors  so they can be used as a game.

Leonardo Peralta Phillips was born in Mexico City in 1952. He is a painter, sculptor, designer and a student of transcendental philosophy and consciousness.
He began his work as a painter in 1972 with the play "Gatología", in which he interpreted the human world through cats, with social criticism and surreal humor.

"La Lotería" will be on exhibition with free admission until 15 November. So that it exactly coincides with the Day of the Dead.