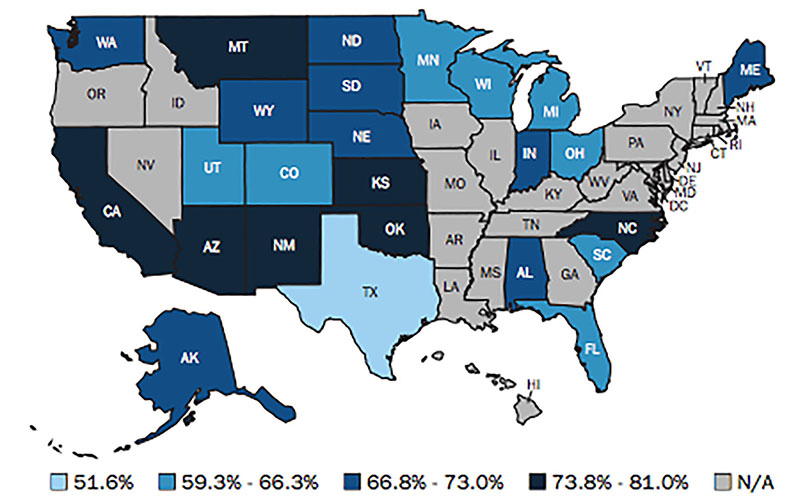 WASHINGTON – Four of five adult Native Americans in Arizona were obese or overweight in 2013, the highest rate in the nation among states studied in a new report.

“The State of Obesity 2015,” by the Trust for America’s Health, said 81 percent of Native Americans and Alaska Natives in Arizona were obese or overweight in 2013.

The report did not break out rates of those who were considered obese from those considered just overweight. By way of comparison, the report said the obesity and overweight rate for the overall population of Arizona was 64 percent in 2014.

Advocates said they were not surprised by the numbers, pointing to the unavailability of fresh and healthy food and a lack of access to health care services for many Native Americans in the state.

“The tribes are located in very remote parts of the state. It often takes up to one to two hours to get to a center” for health care, said Kristine FireThunder, director of the Arizona Commission of Indian Affairs.

Data in the report came primarily from the Centers for Disease Control and Prevention’s Behavioral Risk Factor Surveillance System. It involves “health-related telephone surveys that collect state data about U.S. residents regarding their health-related risk behaviors, chronic health conditions, and use of preventive services,” according to the agency’s website.

The report looked at all 50 states, but only included Native American data for 25 states because Indian populations in the other states were too small. Arizona had the highest rate of those states, while Texas was lowest among those 25 with an obesity and overweight rate of 51.6 percent.

“The rates are significantly high on average,” Hamburg said of the Arizona numbers. “We need to fight this when kids are young.”

The ratings are based on body mass index, which is determined by dividing a person’s weight by their height in inches squared, then multiplying that by 703. Anyone with a body mass index of 30 or more is considered obese, while those with a BMI from 25 to 29.9 are considered overweight, according to the report.

Native Americans are not alone in the trend toward obesity. Obesity rates nationally have more than doubled in the past 35 years, and the average American weighs over 24 pounds more than in 1960, according to the obesity report.

In Arizona, the obesity rate among the overall population has almost tripled since 1990, going from 10.6 percent to 28.9 percent in 2014, the report said.

A spokeswoman for Arizona’s Department of Health Services said reducing obesity is a top priority for the state, and agreed with Hamburg that it’s important to start the fight when people are young.

“If you can prevent it early, you’re going to have fewer consequences,” said Deborah Robinson, chief of the health department’s community innovations office.

“It’s one of our top priorities,” she said. “Arizona as a whole is committed to reducing obesity.”

FireThunder said unhealthy diets played a large role in the high rate of weight issues among the 357,000 Native Americans who were living in the state in 2014, according to Census Bureau estimates.

Those unhealthy eating habits are the result of some communities abandoning “traditional culture and practices,” including the cultivation of crops, she said. Nowadays, the laborious process of growing enough fruit, grains and vegetables to feed a community is often tossed aside in favor of processed foods.

“We have grocery stores for that,” said FireThunder. “But the processed food, our bodies aren’t meant to handle.”

State of the nations

States with the highest and lowest reported overweight and obesity rates among American Indians and Alaska Natives in 2013, according to data from the Centers for Disease Control and Prevention. Only 25 states were ranked.

featured, health, Native American, obesity
Previous Post New platform strives to give every Mexican a voice in their nation's future
Next PostCrowdfunder: Helping the victims of Guatemala landslide

New platform strives to give every Mexican a voice in their nation's future
Comment
Crowdfunder: Helping the victims of Guatemala landslide