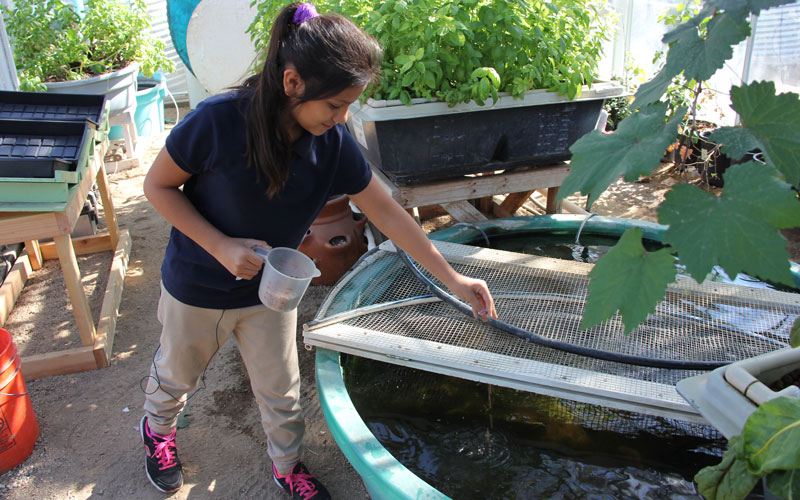 TUCSON – A whistle blows and little feet run through the hallway and out to the open courtyard of Manzo Elementary that contains the school’s garden. A frenzy of chatter and chicken squawks fill the warm November air.

One child grabs a shovel, much taller than she is, and starts moving compost from one area to another while her fellow classmate goes into the chicken coop and grabs a Plymouth Rock chicken. “Look they lay eggs in here,” says another, as he lifts a side door to reveal a nesting perch on the inside.

A few feet from the chicken coop is a greenhouse, about 10 feet wide and 20 feet long, with an aquaponics system that connects planter boxes with basil and swiss chard to a fish tank with tilapia. The water cycles through the planter boxes which have clay balls containing bacteria that break down the fish waste and water the plants, the water then cycles back into the tank.

Manzo’s program is the most extensive school garden program in Arizona, and it is the first to have certification from the state for rainwater harvesting, composting and serving garden grown foods in the cafeteria. Manzo serves a lower-income area in Tucson and has fundraised all of the money used to pay for the garden.

“If it was ordinary school I would still want to come, kind of like 50 percent, but since this is a special school I really want to come every single day. Sometimes I can’t because we have no gas in our car. I used to walk to school,” Valerie Valenzuela, a student in the fourth grade class, said.

Manzo has become the “gold standard” in Arizona for school garden programs, and since the program’s inception, other schools have followed suit, said Kathryn Mathewson, lead School Gardens sanitarian and health educator for the Arizona Department of Health Services.

“I just think that school gardens are great. They teach the kids so many different things and that really and truly it just boosts their morale. I would like to see a garden at every single school, whether or not they go through the certification,” she said.

Currently 22 schools are certified, and eight elementary and high schools are waiting to be certified. The state certification requires the garden program meet some sanitary expectations before the food is brought into the cafeteria, however if a school wants a garden but will not be eating the food then it does not have to be certified.

The Manzo program started as a counseling tool. Moses Thompson came to Manzo in 2006 as a counselor. When kids were struggling, he would take them to work in the garden instead of more traditional counseling.

Now, he’s the program coordinator for the Tucson Unified School District and University of Arizona, working to support each school’s gardening and sustainability program. An internship program matches the college students with a Tucson school.

“It went from a very small kind of faceted counseling program and now it’s a schoolwide focus where the social and emotional stuff still happens, but really the focus in the program is academic integration,” he said. “Now, it’s helping the teachers use these spaces for teaching language arts, math and science.”

Throughout the day, Manzo students may go out to the tortoise habitat to make observations for a story they are working on in language arts, while another class may be measuring plant heights and spacing or doing a cactus inventory in one of the courtyards for math class. After school, the science club uses the garden to generate scientific questions and then take those questions through the scientific method and produce posters with their findings.

For lunch, a few times a year the entire student body harvests the garden for a cafeteria event. Last time the students picked harvested bushels of greens: romaine, kale and lettuce, and then the next day the cafeteria made pesto for all of the students to try.

“It was so good and we also had this big board where you could put a pink sticker if you liked it. And if you tried it, you can put a red sticker. And the green sticker you would put if you loved the pesto,” Valenzuela said. “Most of people put loved it; a lot of people did.”

For the garden to produce enough food for the cafeteria, the school has to focus on one crop and plans about five harvests per year. Smaller patches are used for other crops and those are sold at Manzo Market, an after school farmers market for parents and kids.

“I think that what helps the most is the kids become the ambassadors for these vegetables that the families might not otherwise be interested in,” said Thompson. “But if you’ve got a first-grade kid who just grew a crop of Swiss Chard, I mean those are the kids that run to the car and pull the parents by the arm and drag them over to Manzo Market.”

The market is a good fit for the community not just because the kids are excited about the food they’re growing, but because Manzo’s predominantly low socioeconomic Mexican-American neighborhood has a deep food heritage, Thompson said, and this population is overrepresented in obesity, heart disease and diabetes.

“Growing up with Type 2 diabetes really limits your opportunities in life,” Thompson said. “So, getting the kids excited about fruits and vegetables that they might not otherwise be excited about, I think is an important part of the program.”

Manzo proudly holds the “Greenest School in Arizona” title, but Thompson doesn’t think every school has the resources to be as ambitious. Instead, schools should focus on integrating smaller and more easily maintained gardens, he said.

Valenzuela agrees, she loves the school garden program and is sad any time she has to miss school, but most importantly she said: “I want a garden to show my kids when I grow up.”