Young refugees who arrive at the border alone struggle in U.S. 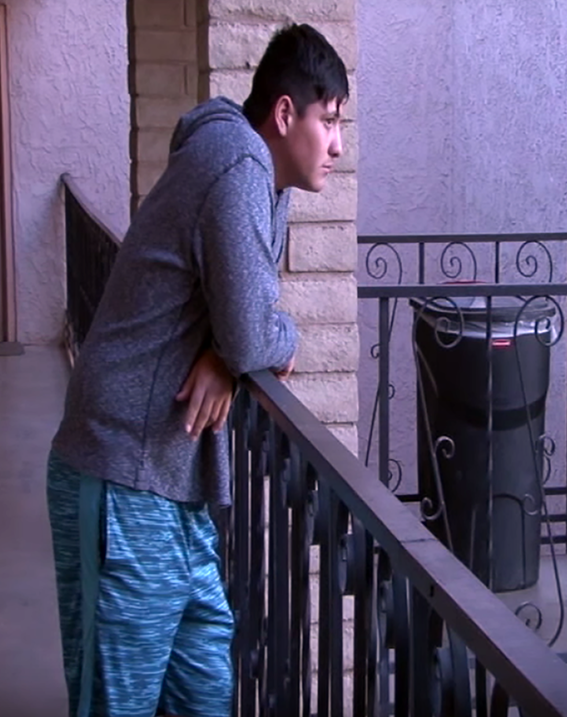 PHOENIX – Immigrant youth who arrive at the border alone and have no family to take care of them in the U.S. often struggle to build a life.

Jose Montoya set off from Sinaloa, Mexico with nothing but the clothes on his back.

“I stopped when I got tired on the way. One time I stopped by this shaded tree that had fruit. That was the first time I had eaten in awhile,” Montoya said.

He survived scorching heat during the day and freezing temperatures at night as he made his way north to the border.

Montoya fled the city that gave birth to Mexico’s drug cartels. Many young men end up working in the violent drug trade. Cemeteries in Sinaloa are filled with those who die young.

“I couldn’t stay there,” Montoya said. “Those people are everywhere and no one is safe. And there is no good way to make money.”

After he made it to the border and across to Arizona, Montoya was locked up in an immigration detention center.

If he had arrived year ago, he would have been placed in foster care or shelter for unaccompanied minors.

Young migrants or refugees who cross the border alone and have no relatives who can accept them in the U.S. are sent to foster homes or special shelters for immigrant youth. Those who are about to turn 18 are sent to detention centers.

Those who are released often have no place to go. Montoya gained his freedom because he was granted refugee status. The Florence Project which provides free legal services for immigrant detainees in Arizona took his case.

After he was released Montoya spent time in a temporary group home. His lawyer then helped find him a bed at the Phoenix Dream Center, a non-profit organization that shelters at risk youth.

The faith-based non-profit organization relies on volunteers to help homeless, low-income youth, including those who age out of the foster care system. Four months ago the center began helping young people like Montoya who are held in immigration detention centers.

He is just one of thousands of children and teenagers who set off on the treacherous journey to America to escape the ravages of their own countries.

According to the Pew Research Center, between Oct. 1, 2014 and July 31, 2015 more than 30,000 minors traveling without a parent or guardian were taken into custody on the southwest border. Many endured hardship, abuse and neglect at the hands of adults along the way.

The Phoenix Dream Center has has helped about 12 young refugees and immigrants in the past four months.

“I’m not talking about politics, I’m talking about these kids,” Jones said. “They don’t speak English and haven’t finished school, they don’t know how to get an immigration lawyer or why they are in a detention center.”

“They have no clue,” Jones said.

The Phoenix Dream Center’s Living Youth program partnered with The Florence Project, the International Refugee Committee and other agencies in an attempt to assist young refugees in detention facilities.

“There aren’t enough programs out there to house these kids so they end up in a detention facility,” said Sherry Jones, director of the Phoenix Dream Center.

Roughly 70 percent of the unaccompanied minors apprehended this year have come from Central America, according to the Pew Research Center. More than 10,750 children who arrived at the border left Guatemala 7,000 are from El Salvador and 4,000 fled Honduras. All of the Central American countries are coping with extreme gang violence, poverty and corruption.

At least 9,000 children and teens from Mexico crossed the border alone and were taken into custody by Border Patrol agents.

A refugee is legally defined as any individual who has a well-founded fear of being persecuted based on race, religion, nationality, membership of a particular social group or political opinion; is outside the country nationality; and the country of origin is unwilling or unable to provide protection to that individual.

The number of children from Mexico trying to cross the border alone has steadily climbed.

Unlike the children who arrive at the border alone from Central America, Mexican children are promptly sent back to their home country within a day or two “making it even more difficult to obtain a full picture of who these children were and why they were coming to the U.S.” according to the UN report.

Montoya cannot go home, he said, but he is reluctant to give details. He like many in drug trafficking regions of Mexico won’t say the name of drug traffickers instead he refers to them as “those people.”

Montoya was in an immigration detention center in Arizona for four months, a place he refers to as “jail.”

“Everyone gets held in a detention facility, it is just a matter of how long,” said Stacie Blake, Director of Government and Community relations at the U.S. Committee for Refugees and Immigrants. “Kids younger than 18 are held for just two days but the older kids could be there for much longer.”

“When the kids leave they are released to a U.S. sponsor, often a family member but that’s not always how it works,” Blake said.

Montoya was adamant he did not want to live with his aunt or two older brothers he has in Arizona.

Blake said children are often not just fleeing violence but trying to reunite with parents or other relatives in the U.S. Many do have family members who desperately want them.

“Where there is a larger Hispanic population, that’s where these kids go – that’s why so many are in Phoenix,” Blake said. “But for all of these kids coming, their biggest problem isn’t always finding their family, it’s often trying to deal with the legal system and their immigration hearing.”

But older teens struggle in the U.S. on their own.

“When a young adult turns 18 and gets out of the detention facility or is placed with family and it doesn’t work out, they are often told there isn’t room for them in group homes and shelters,” Blake said. “Those who cross as teenagers struggle with the family reunification aspect when they realize it isn’t the dream they expected it to be because circumstances have changed, then they end up on the streets with no place to go.”

The Phoenix Dream Center offers shelter and a safe haven at no cost but the young people have to go to church, bible study and attend an online classes.

“I did not attend school in Mexico, but I am enjoying the classes here,” Montoya said. “ But I struggle with retention of information.”

The young adults are guided by house parents who mentor, counsel and provide the practical support needed to become self-sufficient.

Jones and the faculty at the Dream Center hope they will be able to take in more young refugees in the future.

“If they are hurting, then we can help them,” Jones said. “If they are abandoned then we can keep them safe. If they feel rejected we can make them feel needed and wanted.”

“Our goal at the Dream Center is to find a need a fill it, find a hurt and heal it.”