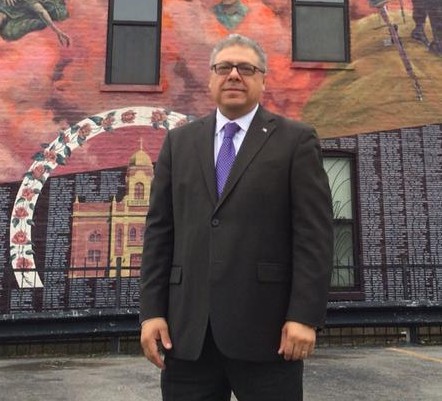 “We always stick to one issue, immigration, and even though I have been a big voice in the immigrant movement, we shouldn’t just focus on one issue,” says Javier Salas. “People need a lot of things…and we need someone who is talking to people in the district and not traveling around the country.”

Salas, a broadcaster whose career has spanned 15 years in the Chicagoland area, filed his statement of candidacy last week. Born in Mexico City, Mexico, Salas immigrated to the United States at 26 and worked factory and restaurant jobs while finishing his ELS degree. While working on his degree Salas juggled overnight shifts at radio stations while trying to land a full-time day slot. He currently writes a weekly column for Hoy, is a commentator on Hoy Noticias MundoFox 13, and is a newscaster with Lay Ley Radio.

In addition to his broadcasting career, Salas was also a senior policy advisor for former Gov. Pat Quinn from 2013 to January of this year. In that capacity his responsibilities included…