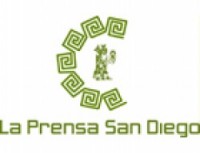 To be Presented to Chicano Park for Their Forty Second Anniversary

SAN DIEGO — Cesar Chavez once remarked that, “Real education should consist of drawing the goodness and the best out of our own students. What better books can there be than the book of humanity?” – A very ambitious group students at O’Farrell Community School in Southeast San Diego have just completed portrait of Cesar Chavez, honoring his life and struggle and are preparing to present it to Chicano Park.

In the tradition of giving back to the community, championed by Cesar Chavez, Spanish instructor Jose Islas spent the last six weeks working after school with his students to create an original work of art reaching nearly ten feet in height and consisting of 5500 dominoes. Inspired by the work of mathematician Robert Bosch of Oberlin College, Mr. Islas started with one hundred sets of double nine dominoes, which contain 55 unique dominoes in each set and by using the techniques of mathematical optimization, Jose accomplished his goal of using every single domino, with not one left over.

Mr. Islas, whose parents, Jose and Luz were educators in Mexico, decided to become a teacher to inspire students and have them realize that with hard work and education they can make the impossible possible. The task was a bit daunting, he admitted and many times he did not know what to do.

We first had to sort over 5000 dominoes, next groups of students working with blueprints put together 100 tile sections. They were then checked for accuracy and glued to vinyl tiles. A custom frame was built and painted. Lastly the vinyl times were glued down to the frame and the last 500 joints were installed.
This very special gift to Chicano Park will be unveiled…

Cesar Chavez, farm workers, featured
Previous Post Video: Case of Anastacio Hernández-Rojas questions use of excessive force by Border Patrol agents
Next PostChasing Down a Better Way to Run: Learning How and Why We Run

Video: Case of Anastacio Hernández-Rojas questions use of excessive force by Border Patrol agents
Comment
Chasing Down a Better Way to Run: Learning How and Why We Run