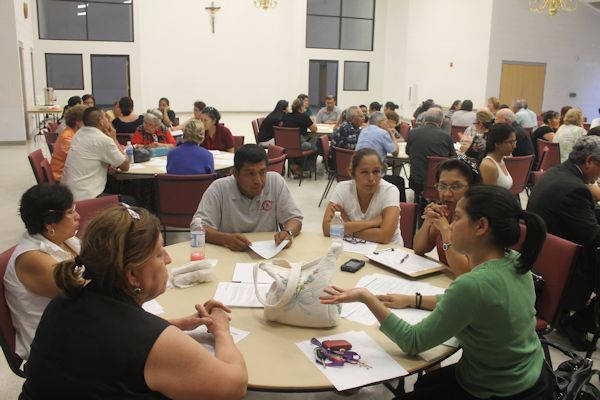 McALLEN,TX — Community activists say undocumented immigrants are so fearful of coming out of the shadows that they will not even risk going to a town hall meeting that is being held to help them.

Valley Interfaith held a meeting about immigration reform at Our Lady of Perpetual Help in McAllen on Tuesday evening. About 80 immigrants attended. However, community organizers say this number does not come close to representing the interest level there is in the subject.

“We could have had thousands of people at this town hall meeting because people want to know what is happening with immigration reform. But, people are afraid. They are afraid of being picked up. I could probably have brought 230 people from Las Milpas alone,” said Laura Garcia, a Valley Interfaith member and community activist from south Pharr who attends St. John the Baptist Catholic Church in San Juan.

Ninfa Guerra, a Valley Interfaith member who attends St. Joseph the Worker Catholic Church in McAllen agreed. “I called two people to come tonight. They were being told not to come because of the fear of being picked up by Border Patrol. They trusted us but they had fear,” Guerra said. “It is really sad. People are fearful of even giving their information to us, for fear of being deported.”

“For me, the main thing we heard about tonight was the fear immigrants have of going out and not coming back to their families. There is hope that this year we will finally get immigration reform but until the bill is signed by President Obama the fear is still there,” Leyva said.

Leyva said fear and apprehension is apparent in the community he serves. He said he can see it in the faces of parishioners.
“The fear is that if they come out from the shadows they get picked up. Even coming to a meeting like this is not easy. They do not know if Border Patrol is going to be out there waiting for them. We know Border Patrol knows about this meeting. So there is fear. I hear it in the church and in the community,” Leyva said.

Asked what his advice would be, Leyva said…