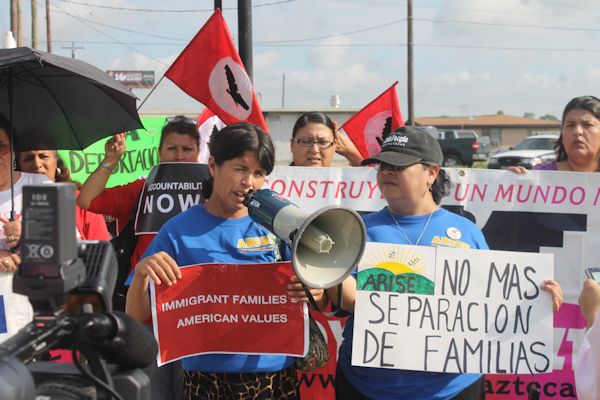 EDINBURG,TX — When state Rep. Terry Canales called DPS to find out why the department was putting up random checkpoints in the poorest parts of the Rio Grande Valley he could not believe what he was told.

“It was such a telling remark. The staff member said DPS was putting up the checkpoints because the federal government was not doing its job. When I pressed her on this point she backtracked,” Canales told the Guardian.

All the public statements from DPS about the checkpoints have focused on the high percentage of Valley residents driving without a driver’s license and lacking auto insurance. DPS Director Steve McCraw has strongly denied state troopers are enforcing federal immigration laws.

Many immigrants do not believe DPS and dozens have contacted Valley media outlets to tell of friends and loved ones who have been deported after being picked up at the checkpoints.

Thousands of immigrants have not ventured out of their homes since the checkpoints were erected. Businesses have lost workers and schools have lost students.

“We cannot leave home. I can’t work, my wife cannot go to evening classes and our children cannot go to school,” said one immigrant from Edinburg, who asked that his name not be given out. “We cannot risk being picked up and being deported.”

“The federal government has proven incapable of fighting the increased drug and human trafficking plaguing this region,” Dewhurst said in his statement. “I’m proud to say that Texas law enforcement is showing Washington how to secure the border by coordinating the efforts of local, state and federal law enforcement entities.”

Groups in the RGV Equal Voice Network were quick to pounce on Dewhurst’s remarks, claiming the lieutenant governor was confirming what they have been saying all along, that DPS was picking up drivers and handing them over to Border Patrol.

Equal Voice network weaver Michael Seifert said members in the network were not surprised by Dewhurst’s boast that state troopers went to the Valley to enforce the federal immigration law.

“We have asserted all along that the troopers were sent here to harass immigrant communities, even as the state director insisted that DPS brought in extra troops to enforce traffic laws. As is usual…