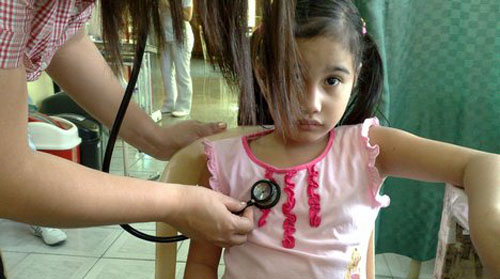 LAREDO, TEXAS – At present undocumented children do not get healthcare from the government but that needs to change if the U.S. wants to have a healthy, productive workforce in the future.

This is the view of Dr. Gilbert Handal, vice-chair of Texas Health and Human Services Commission’s medical care advisory committee. Speaking at the conclusion of the 8th Annual Border Health Conference, the El Paso-based physician said the government needs to provide “some kind of legalized insurance for undocumented children.”

Handal discussed his power point presentation with U.S. Rep. Henry Cuellar. It showed projections of a declining U.S. population after 2025 and an increased burden on those in the workforce to pay for the healthcare needs of retiring Baby Boomers.

Cuellar, D-Laredo, who hosted the conference, said he was aware of the stats in one of the slides, which showed that immigration from Mexico is dropping at a fast rate.

“The fertility rate in this country has dropped from 2.5 in the 1970s to 1.0. The population will shrink around 2035. The working age population is going to drop tremendously. I am not saying open the doors. I am saying control immigration to what is convenient for us as a country,” Handal told Cuellar.

Handal said solving the issue of who is going to do the work in the future is not easy. He said it is complex. Part of the answer is increasing the retirement age, so that people work for as long as they want to. He said new technology is going to be needed to make the workforce more productive.

And, he said, undocumented children are going to have to be looked after so they grow up into healthy, well-educated and productive workers. “A lot of the kids that are here need to receive healthcare early, so they are not sick. We need them to be healthy when they grow up. We need to take care of them now, when it does not cost so much. We need to take care of the kids that are here. It is a must,” Handal told Cuellar.

Handal told the Guardian later that about 35 states in the union restrict legal immigrants from getting any kind of government assistance for five years. As for undocumented immigrants, forget it, he said, they get nothing.

“The child that lives here ought to be cared for because that child is going to grow into one of the workers we need. We are going to have an aging population. Ten thousand Baby Boomers retire every day. By 2025, our population stops growing. There is no way they can make ends meet. Our society is going to go down the drain. Medicare will be defunct,” Handal warned.

Compounding the issue, Handal said, is…