Thirteen and Homeless — San Francisco’s homeless families on the rise 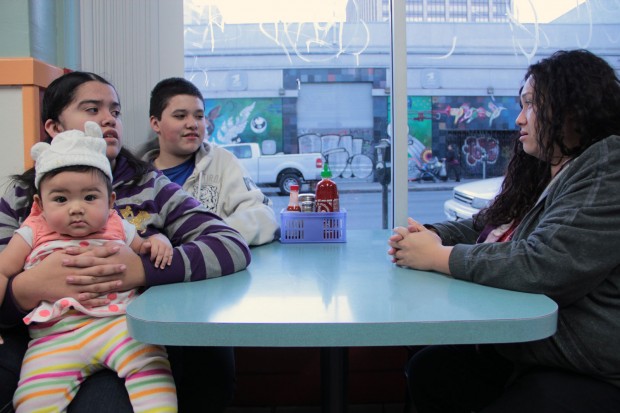 Anthony Velez, 13, is tired of trudging around the Tenderloin with his family to find something to eat that won’t give him a stomachache. He misses his mom’s home cooking.

“I’m used to having a refrigerator,” said the eighth grader at Everett Middle School. He’s at a diner across the street from the Hamilton House, where he, his mother, and three siblings live. Anthony had stayed home sick from school that day because of a bad stomachache so they decided to skip out on the dining room’s tuna casserole and find something easier to digest.

“It’s like I’m confined in a box,”Melissa Velez, Anthony’s mom, said. “I feel enclosed, and the children feel that way too.”

Anthony now has a difficult time getting up and out the door. He was comfortable in their house of 10 years at 21st and Florida streets, and he doesn’t like the Tenderloin. But more than the neighborhood, he doesn’t like being homeless.

Reina Cruz-Velasquez can tell him that it doesn’t get easier. Her family — including Wanda, 9, and Hector, 13 — has been homeless for almost four years.

“It’s difficult in the shelter because you have no private life,” Cruz-Velasquez said while fighting back tears. “The kids would like to live better. They want to have a kitchen, living room, a bedroom.”

As is the case in many American cities, the number of homeless families in San Francisco — many from the Mission and Bayview — is on the rise.

(Featured Photo: The Velez family tries to decide what to do about dinner. Photo Credit: Andra Cernavskis)