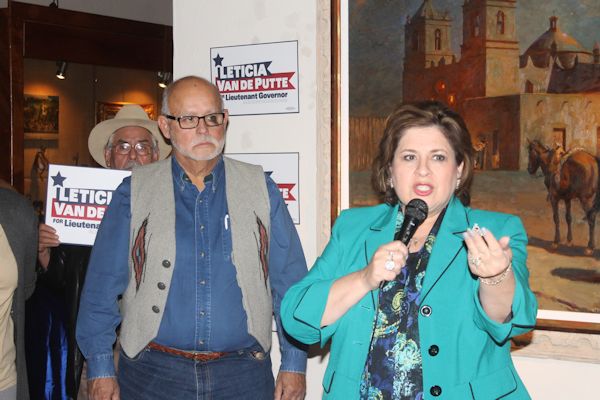 McALLEN, TX — State Sen. Leticia Van de Putte has questioned the motives of Lt. Gov. David Dewhurst after he pushed for the Department of Public to mount a year round “border surge” operation.

Van de Putte, who is running to replace Dewhurst as the presiding officer in the state Senate, was in the Rio Grande Valley this week. Like La Unión del Pueblo Entero (LUPE) and state Rep. Terry Canales before her, Van de Putte claimed Dewhurst was “pandering” to the base of the Republican Party when he proposed authorizing an additional $60 million to DPS for border security operations.

“I am quite puzzled at Lt. Gov. David Dewhurst’s request for more funding for DPS. We just finished a legislative session in June of this year. If the Lieutenant Governor had concerns about border security he certainly had a whole year to request $60 million for this purpose,” Van de Putte, D-San Antonio, told the Guardian, while making a campaign stop at Nuevo Santander Art Gallery in McAllen on Wednesday evening.

“To my knowledge, DPS did not request this additional $60 million on their legislative appropriation request. If it was so important, DPS did not request it and the Lieutenant Governor was silent on this. It is odd that he would only bring this up when he is in a highly contested race for lieutenant governor. It smells to me like he is pandering to get votes for the five percent who really determine the outcome of the Republican primary.”

Video: Latino-themed superhero comic series, Aztec of the City, rises to new heights in latest volume
1 Comment
The Scream was inspired by a Peruvian mummy