Border economic officials: ROOT CAUSE OF ILLEGAL IMMIGRATION IS POVERTY, INSECURITY AND LACK OF OPPORTUNITY 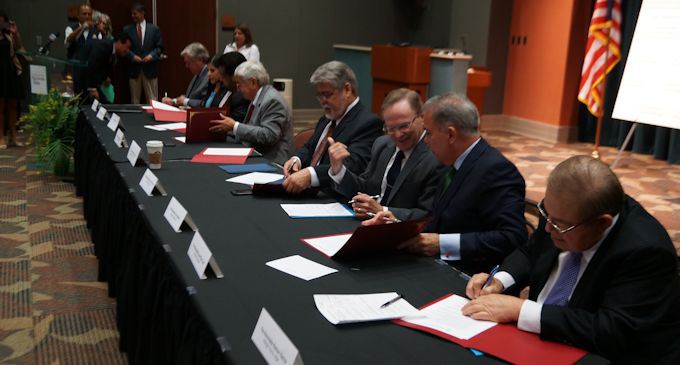 HARLINGEN , RGV – Elected officials who signed the BiNED agreement says their focus on bringing advanced manufacturing to the region is a better bet than pumping more and more money into border security.

“The use of traditional command and control strategies to protect our southern border has reached a point of diminishing returns. The marginal benefits from reduced illegal immigration and insecurity produced by constructing more border fencing and adding more ‘boots on the ground’ far exceed the cost,” a 2,300-word BiNED document states.

“Although command and control measures are an important first step in controlling our borders, continuing their expansion is now a wasteful use of scarce resources.”

BiNED members say there are numerous reasons why continued expansion of traditional command and control measures is an inefficient approach to controlling the southern border. The fundamental one, they say, is that “traditional command and control measures do not address the principal root cause of illegal immigration and insecurity – poverty, insecurity and lack of opportunity.”

Instead, the members of BiNED say, a more cost effective strategy for reducing the flow of undocumented immigrants and insecurity on the Southern Border, is to “promote a safe and prosperous border through targeted economic development and specifically through a binational advanced manufacturing strategy that encompasses the entire southwestern border with the U.S. and Mexico.”

BiNED stands for Bi-National Economic Development. Members of the group say the concept involves the creation of “an integrated, innovative and competitive bi-national U.S./Mexico border economic mega-region whose economic focus is advanced manufacturing. The key word, members of BiNED say, is…