Commentary: Arresting Babies on the Border 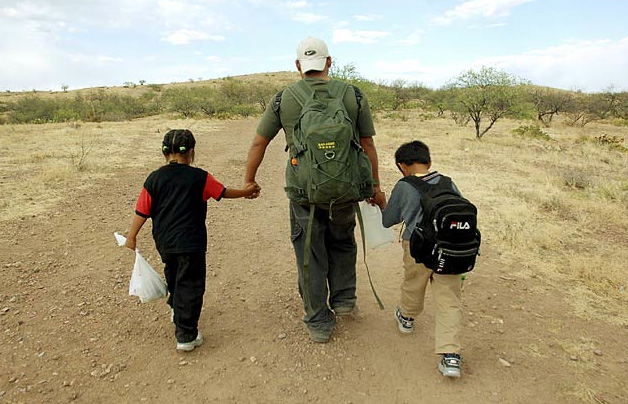 I had come to the border wall with a correspondent from National Public Radio to see its impact on the environment.
We had also seen evidence of the apprehensions that occur there daily: piles of shoelaces and belts that immigrants were forced to abandon before being taken into custody, and even a pair of plastic toy helicopters, littered the ground.

The Border Patrol agent said that they had captured 18 people. Most sat in a line in the dirt beside the rusting wall as agents took their names and bagged their possessions. Only three or four were adults.

Inside a Border Patrol van, escaping the heat, were two mothers, each with an infant in her arms. On the seats beside them were a pair of toddlers.

The Border Patrol would probably prefer not to use the term “arrest,” but the children were taken into custody along with the rest of their family. All 18 will be included in the sector’s apprehension statistics.

In 2013 the Border Patrol apprehended 26,027 juveniles in its Rio Grande Valley sector, 21,553 of whom were unaccompanied. Border-wide 38,833 out of the 47,238 minors who were captured were traveling without an adult.

At least these children were not on their own.

Call it an apprehension, call it an arrest, for a child too young to walk or talk the terminology does not matter.

The United States of America, through elected Representatives who are meant to express the will of its citizens, spent $18 billion last year to keep these families out. A few years back taxpayers spent $12 million per mile to build the border wall that stood nearby, and more than $3 billion was spent to wall off 652 miles of the southern border. From 1995 to 2003 we doubled the size of the Border Patrol, then over the last decade we doubled their ranks again. They carry out the mission that we have given them.

We are arresting babies.

And toddlers. And teenagers. And adolescents. And their parents.

Intrn'l video: 9-yr-old's quest for straight hair makes his mother think he's anything but straight
Comment
Mexican children to march for a childhood without violence