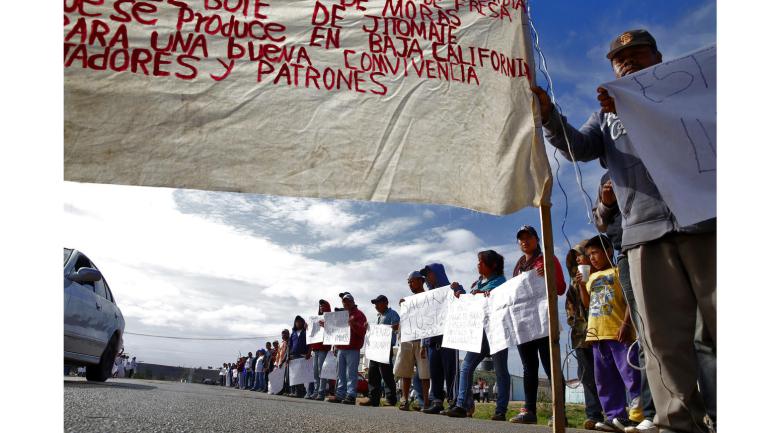 BAJA, CA — Farmworker leaders, farm employers and Mexican government officials have initiated talks aimed at resolving a massive labor conflict connected to the U.S. food industry that’s rocking the border state of Baja California. Long-simmering labor grievances exploded into the open March 17 when thousands of farmworkers blockaded the Trans-Peninsula Highway between the agro-export region of the San Quintin Valley and the coastal city of Ensenada, a popular destination of U.S. tourists.

Led by the independent Alliance of National, State and Municipal Organizations for Social Justice, the strikers demand higher wages, including double pay for Sundays and holidays; respect for time off and other provisions of Mexican labor law; enrollment in the national social security system; maternity and paternity leaves; an end to sexual harassment of female workers by male foremen and bosses; and the revocation of sweetheart contracts signed by unions affiliated with President Enrique Pena Nieto’s Institutional Revolutionary Party (PRI).

“We wanted to make ourselves known, so they could see us and understand that we workers are men and women of flesh and blood and not just hands working the fields,” said Fidel Sanchez, an indigenous Mixtec leader of the Alliance. “We have faces, names and families. We are tens of thousands, because with us are our children, who are also workers just like their parents have been.”

Mostly, the striking workers are indigenous migrants from the southern states of Chiapas, Veracruz, Puebla, Oaxaca, and Guerrero. Many have now set down roots in the San Quintin Valley. Making up a large percentage of the workforce, women workers complain of pesticide exposure as they are forced to work even while pregnant.

The strikers demand a wage increase from about $7 to $20 for an eight-hour day. In a glaring gap between wages and market prices, workers are paid less than a dollar for a box of strawberries that can fetch up to $45 in the United States, according to the Alliance. Labor activists say piece rates for each box of picked strawberries have not increased since 2001.

The strike was called as strawberry and tomato harvests were underway in a region where large-scale, export-oriented agriculture has flourished under the North American Free Trade Agreement.

Violence flared during the early stages of the protest, with vandalizing and looting of stores breaking out and rock-throwing battles erupting with Mexican soldiers and police, who fired tear gas and rubber bullets. Business and school activities in the San Quintin Valley were paralyzed by the upheaval. As the protest movement gained momentum, the U.S. Consulate in Tijuana issued a travel advisory for the affected zone.

Initially, about 200 people were detained but most were quickly released; 23 persons were held and charged by the federal attorney general’s office with interfering with highway transit. But reports of new detentions continue in the press. Strike leader Fermin Salazar said farm labor activist Gabino Bautista was arrested simply for having a sound speaker atop his car. Both the Baja California Attorney General for Human Rights and the official National Commission for the Development of Indigenous Peoples (CDI) have pledged to monitor the conditions of the detainees.

Farmworker leaders disassociated their movement from the violence, blaming infiltrators from unions traditionally associated with the PRI and accusing police of needlessly beating people.

A good share of the anger was directed at Baja California Governor Francisco “Kiko” Vega de la Madrid. Farmworkers said a petition detailing their grievances was delivered to Vega’s administration last fall but produced no response.

“Show your face!” strikers shouted in reference to the governor. Some Mexican press outlets and observers likened the movement to a slave rebellion because of the labor conditions prevailing in Baja California.

Many locals were stunned by the magnitude of the uprising, but one longtime human rights advocate was not surprised. Victor Clark Alfaro, director of Tijuana’s Binational Center for Human Rights, recalled a similar social convulsion in the San Quintin Valley back in 1996 and 1997.

“At that time, I had an interview with the state governor, Hector Teran Teran, and he asked me if there were guerrilla movements in the zone,” Clark told a Mexican reporter. “The root of the matter is that the conditions are the same 20 years later, with wage demands and the slave treatment of the workers.”

According to Clark, a dozen families control agriculture in the San Quintin Valley, where strawberries, tomatoes and other crops are produced mainly for the giant export market across the border in the United States.

“They do not want the worker to make noise. At the end of the 1960s and in the 1970s, (San Quintin) was emerging as an agricultural zone of some importance and nowadays it is very important,” Clark continued. “The government has not only privileged capital over the worker, as have all the National Action Party governments done in San Quintin in recent years. What we have just seen is the last resort in response to tyranny and oppression that is manifested in a violent way.”

The San Quintin strike hit only days after news of a labor scandal in another part of the Baja Peninsula made headlines. Mexican officials discovered about 200 indigenous Raramuri and other farmworkers, including children, working for starvation wages and living in unsanitary conditions in the state of Baja California Sur.

The Raramuri workers hail from Chihuahua, where an outmigration of indigenous peoples has intensified in the last few decades. Father Javier Avila, parish priest of the Chihuahua mountain town of Creel and president of the non-governmental Commission in Solidarity and Defense of Human Rights, said the low wages and irregular working conditions of Baja California Sur also exist in the Chihuahua apple industry which employs many Raramuris .

“(Employers) recruit them in their communities without checking to see if they are underage,” Avila added. “They pick them all up, and nobody asks the ages of the workers so as to verify if they are of working age.”

In Baja California, Governor Vega “showed his face” at a March 19 meeting attended by farmworker leaders and representatives of government agencies. On Saturday, March 21, Vega returned to San Quintin to assess the situation on the ground and meet with business owners and residents. He also headed a meeting with senior members of his administration and the commander of the local military zone.

Baja’s farmworker uprising has national and international implications that go well beyond the immediate, local issues on the table.

Among the matters at stake are the status of indigenous peoples in 21st century Mexico; the incongruity of official discourse on the treatment of Mexicans abroad and the conditions of internal migrants; respect for the rights of workers and freedom of expression as guaranteed by the Mexican Constitution and international agreements; and the ultimate role of security forces of that have been beefed up with the assistance of the United States and other foreign governments supposedly to fight the drug war and delinquency.

The Mexican daily La Jornada noted the persistence of illegal labor practices in important sectors of the economy such as mining and agriculture, adding that demands for rights are “punished by police persecution in contemporary Mexico.” In an editorial, the newspaper contended that the Baja strike exposed the contradiction of a government policy that criticizes the treatment of Mexican workers in the United States but does “nothing to improve the circumstances of the victims of internal economic migration, as are many of the agricultural laborers who work in the country…”

As the farmworker strike entered its second week, thousands of workers agreed to continue the work stoppages until at least Wednesday, March 25, when negotiations involving the different sides in the conflict are expected to resume. If no solutions are shortly forthcoming, the struggle could cross over into the United States.

Rogelio Mendez, leader of the Binational Front of Indigenous Organizations, pledged a U.S. campaign along the lines of the old UFW boycotts of lettuce and grapes as a solidarity measure if necessary. Mendez said a new boycott could target San Quintin-produced strawberries, tomatoes and cucumbers retailed in the U.S.

Previous Post Peru's beautiful and ancient Vilavilani cave paintings left unprotected
Next PostCrowdfunder: Creating a mural to bridge the gap between Puerto Ricans in New York and on the island

Peru's beautiful and ancient Vilavilani cave paintings left unprotected
Comment
Crowdfunder: Creating a mural to bridge the gap between Puerto Ricans in New York and on the island