New guide spells out health risks, options for women on the border 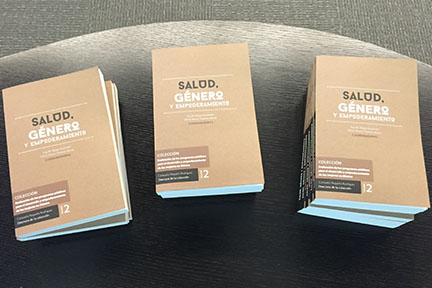 EL PASO –Twenty years ago, Maria Elena Ramos Rodriguez faced the difficult task of finding foster homes for four possibly HIV-positive babies born to mothers who were heroin addicts and were already infected with the virus.

“Luisa had captivated me the first time our sight met,” said Ramos, 57, director of community projects for Programa Compañeros and a long time Juarez activist who has worked on behalf of women’s health issues on the border..

There was little chance that Luisa, one of the babies who was a week old and had been rejected from various facilities, would find a home because of widespread fear among potential caregivers who were afraid of contracting the disease.

Two decades and many tests later, Luisa is a healthy and HIV-free 20-year-old thanks to Ramos, who accepted her temporarily and eventually adopted her.

“I felt so much tenderness when she looked at me for the first time with a wide-open smile. Since that day, I have loved her profoundly,” said Ramos, who speaks in a soft and gentle voice. “The greatest thing that life has handed me was the chance to meet Luisa’s mother through Programa Compañeros and help her by adopting Luisa.”

Ramos is also co-author of a recently published bilingual book, “Salud, Género y Empoderamiento,” along with other women writers from the El Paso-Juarez border region. The book is a collaborative effort to shed light on public programs, like Programa Compañeros, that help empower women whose life circumstances put them at risk for major health issues.

“The main people illustrated in this chapter are women – women who live in different situations than the women sitting here,” she said to a group of mainly women at a book presentation in September at the University of Texas at El Paso. “These are women who use drugs and who live in conditions of utter vulnerability, but they are also women who have a lot to give and a lot to teach …