Program educates border youths about danger of working for cartels 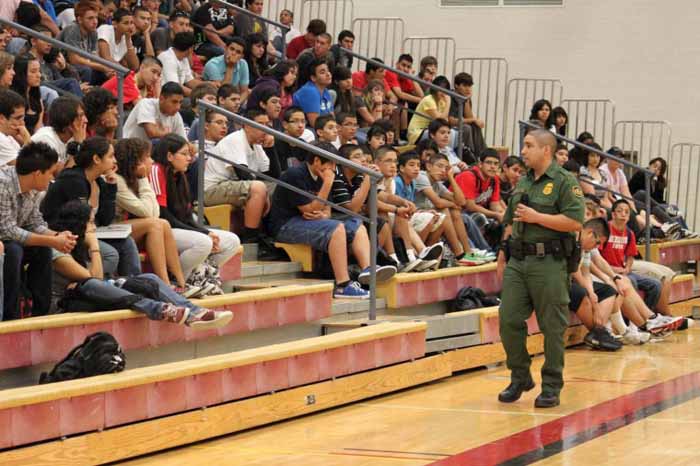 NOGALES, Ariz. – When the Border Patrol stops Arizona youths smuggling drugs through the port of entry here on behalf of cartels, Eric Cantu and other agents often find out those kids have been fed lies.

One common lie: If agents find those drugs taped to your leg, you won’t be prosecuted because you’re a minor.
Another: Minors who are caught will have their records expunged at age 18.

“We want these kids to go on and graduate high school and be successful members of society,” Cantu said. “But in the end, all smuggling is aggressively prosecuted no matter your age.”

In 2012, the last full year for which a figure is available, 405 juveniles were arrested in the Border Patrol’s Tucson Sector for carrying drugs, up from 337 in 2011 and 255 the year before.

Aiming to reverse that trend, the Border Patrol and Arizona law enforcement agencies are taking their message into schools through Operation Detour, a national education program.

“We just want to give them the truthful information they need to know: that they’re going get recruited, and it’s not by a big scary criminal guy but probably one of their friends,” said Cantu, who runs the program here. “We want to tell them how it happens and what to look out for so they can stay on the right path.”

Launched in 2009 by Border Patrol in Del Rio, Texas, Operation Detour arrived in Arizona in 2010. According to Cantu, the program has reached more than 5,000 students in Santa Cruz County alone.

“Kids think this stuff only happens on TV, but we’re talking about real-life stuff,” Zimmerman said. “It gets to the point at which kids are like, ‘I don’t want to be that person’ when the drug cartels are coming after your family and kidnapping you.”

“The cartels will use anybody and everything. And then throw you away,” Cantu said. You may get this car, you may get this shiny ring, this beautiful purse, but it doesn’t last because it isn’t really yours.”

Santa Cruz County Attorney George Silva said the program is an effective weapon against the misinformation of drug-runners who speak in half-truths.

“In the beginning, kids would be laughing, joking around when they were caught,” he said. “But once when we started saying that were were going to have local law enforcement take over the investigation, their whole attitude would change.”

Silva said Operation Detour empowers students to make the right decisions and also presents an opportunity for the Border Patrol and others involved.

“They’re seeing law enforcement in a completely new light. Not as the bad guys out to get you, but as people they can relate to,” he said.

Video: Ozomatli reaches out to fans through video series explaining inspiration behind new album
Comment
Podcast: Among Dark-Skinned Immigrants Some See Skin Bleaching as a Path to Success