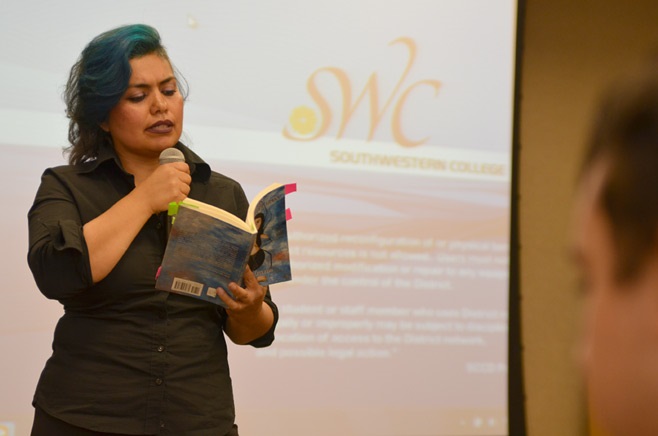 Growing up between San Diego and Tijuana, Francisco Bustos soon discovered that the border became an inspiration for him to become a writer.

“I started writing poetry in Spanglish, Ingleñol, English, and Spanish,” Bustos said. “Personal experiences in places like Tijuana, San Ysidro, Chula Vista, and the South Bay gave me lots of borderish things to talk about, from people, to environments, to foods, to art (especially in the writing and music worlds).”

Although his experiences were common in San Diego, he noticed that those experiences weren’t included in the literature courses he took as an undergraduate and later as a graduate student at San Diego State University’s creative writing program. So, as soon as he became a full-time English professor at Southwestern College, in Chula Vista, Bustos’ goal was to expose as many students as possible to border writers, authors who live in the border or who turn the border into the central theme in their writings.

As part of that mission, he has taught courses on Chicano, border, and Latin American literature. And, most importantly, he has made the Guest Writer Series at Southwestern College, a school with a majority of Latino students, more inclusive –and bilingual.

“I was always made to feel that I belonged and that the influence of border culture and region was important to my work in and out of the classrooms,” Bustos said.

Bustos, with the support of SWC World Languages Department, is organizing the 5th Annual Spring Literary Festival at Southwestern College starting on April 7th and running through early May. The literary festival will present a diverse series of readings from writers from all over San Diego, and Baja California.

“We are lucky to have writers write in our region, so rich and so meaningful,” Bustos said.

Among the writers visiting…