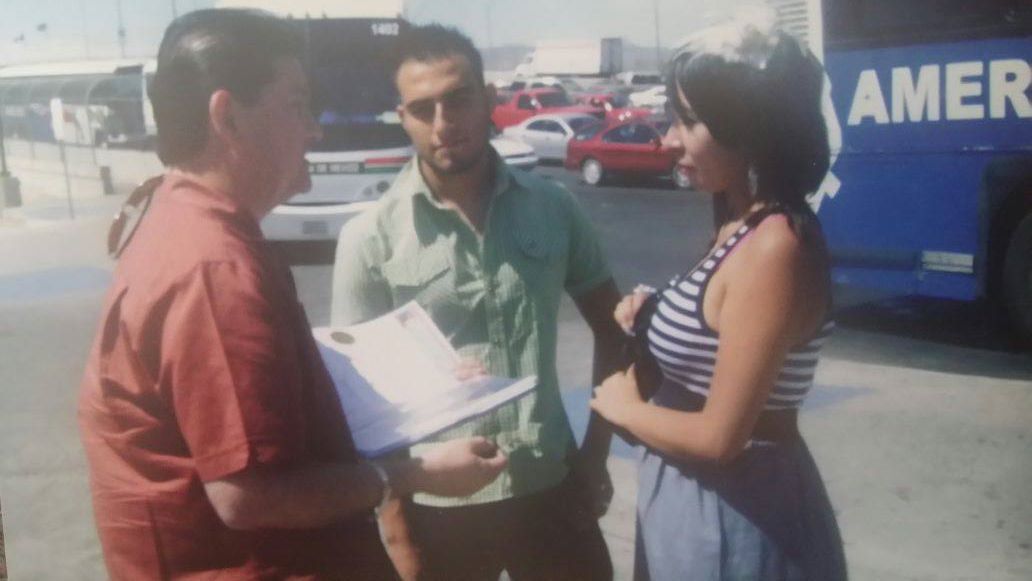 EL PASO – The bride and groom stood on either side of the borderline on the Santa Fe International Bridge, the bride’s toes up against the U.S. side of the line, the groom’s shoes on the Mexican side, as they took their marriage vows.

The crowd of pedestrians coming and going from one country to the other, stopped for a moment and milled around the couple, she in a white prom dress and he in a blue suit.

According to Mike Herrera, civil court judge in El Paso, every year more than 100 couples marry on the international bridges that link Mexico with the United States.

On that same spot under the statue of the American eagle at the midpoint of the Santa Fe border bridge, Esther Chavez, an American citizen, 22, and Jose Antonio Villegas, 24, a Mexican citizen and engineering student, were married in April 2011 by a U.S. judge as dozens of strangers looked on.

“We got married on the bridge because my husband did not have papers, and never had a passport to go to America and I wanted to help and get papers to live in the future,” Chavez said by telephone from Chihuahua.

In order to marry that way on one of the international bridges on the United States-Mexico border, a couple has to follow a series of steps to the letter. The process begins with an appointment with the judge at least two weeks before the event, Herrera said.

“An aunt advised me that the best way to fix papers for my husband was getting married on the bridge and I called and made my appointment exactly a month before,” Chavez said.

She wore a dark blue dress and simple sandals for the wedding. Her boyfriend wore a green shirt and black pants. The judge performed the wedding in a red shirt and dress slacks, she said.

“We felt really wonderful when the judge began the ceremony and started talking,” Chavez said. “Total strangers stopped and attended my ceremony, which I was not expecting. Neither my family nor my husband’s family could join us because they had to work that day.”

To marry in this way, one of the couple must be…

binational marriages, Mexico, United States
Previous Post Crowdfunder: Building awareness about pollution by putting it in the "hands" of the people
Next PostGuest Voz: Race and Beyond: Why Young, Minority, and Low-Income Citizens Don’t Vote

Crowdfunder: Building awareness about pollution by putting it in the "hands" of the people
Comment
Guest Voz: Race and Beyond: Why Young, Minority, and Low-Income Citizens Don’t Vote