Women Never Forgotten: The Murals and Memorials of Ciudad Juarez 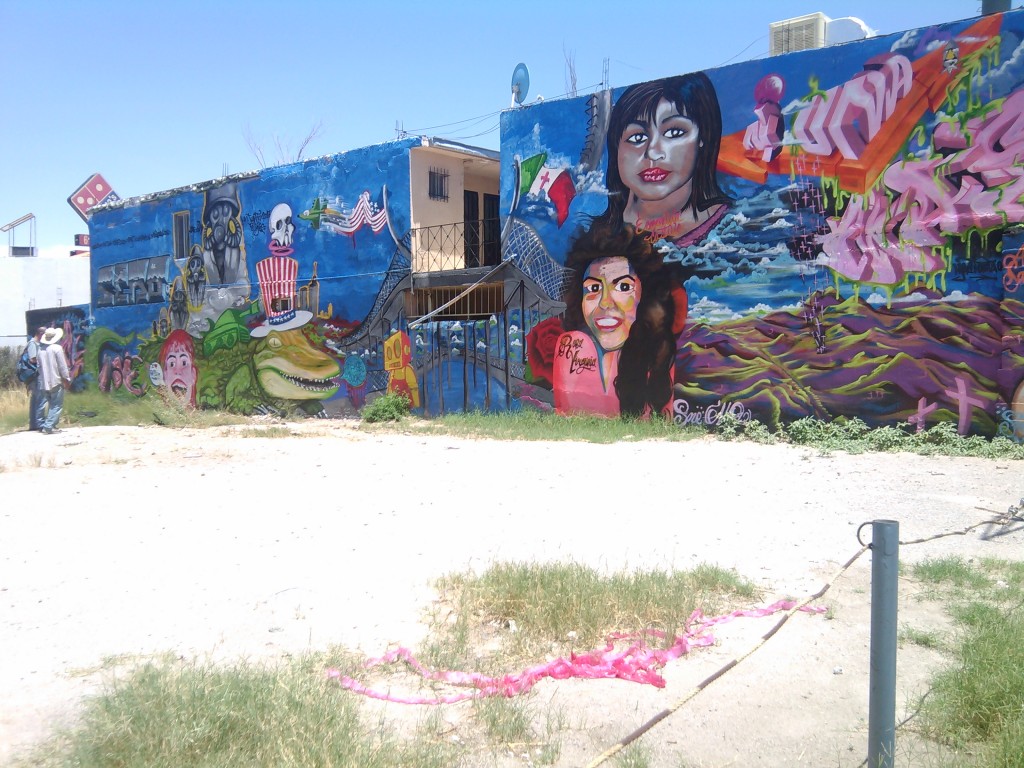 Near the intersection of Vicente Guerrero and Lopez Mateos in Ciudad Juarez, local artist Maclovio describes a hypnotizing mural that honors three female victims of disappearance and homicide-Esmeralda Castillo Rincon, Rosa Virginia Hernandez Cano and Adriana Sarmiento. Conjuring up a sweeping and turbulent landscape, Maclovio and his helpers place the short lives of three girls and women in a world of militarism and nuclear bombs, migration and femicide, or feminicide- the systemic killing of women.

According to the 34-year-old muralist, the mural’s themes connect wars at home and abroad. Shown are important local landmarks including the Rio Bravo, or Rio Grande, the muddy and often water-starved river which both divides and unites Ciudad Juarez from its neighbor of El Paso, Texas; the U.S. army base of Fort Bliss; and “the country of femicides”, symbolized by a red cross in the center of the Mexican flag instead of the eagle, cactus and snake.

Splashed in purple and showered with raining crosses, the Navajo Arroyo in the Juarez Valley is shown at the bottom. Scores of murdered women have been recovered from the rural zone outside the city once famous for growing cotton since the 1990s. As Frontera NorteSur was going to press, officials had completed yet another search of the Navajo Arroyo, reportedly finding more bones, clothing fragments and women’s shoes. 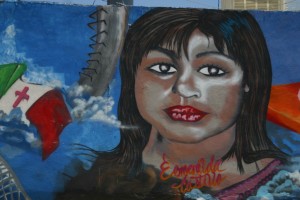 The face of Esmeralda Castillo Rincon shines from the Vicente Guerrero mural, which is located a couple of blocks from the Rio Grande Mall near Juarez’s Pronaf zone. “She has brilliant eyes, but also a sad, worrisome look,” Maclovio says. Esmeralda was only 14 years old when she disappeared in downtown Ciudad Juarez. 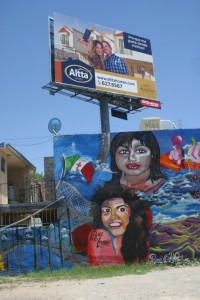 A closer look at the Vicente Guerrero mural reveals a stairway leading from the scenery to a billboard situated above the apartment building where the big work of art stands. The billboard pitches a local subdivision where a beaming couple says they like living, and happy residents can enclose their lives from the outside world. “I liked this contrast,” Maclovio quips about the semiotic clash between the billboard and the mural. Like other murals, the Vicente Guerrero project, completed in the summer of 2015, was a collective effort.

Maclovio says victims’ relatives contributed to the design and painting, as did Perla Reyes, mother of Jocelyn Calderon (disappeared 2012) and Paula Flores, mother of Sagrario Gonzalez (disappeared and murdered 1998). Later in the day, Maclovio pulls out his phone and shows a photo of a rainbow that appeared after the mural group was painting one day and a storm burst from the heavens. “It was very symbolic, he says with a smile flashing across his face…