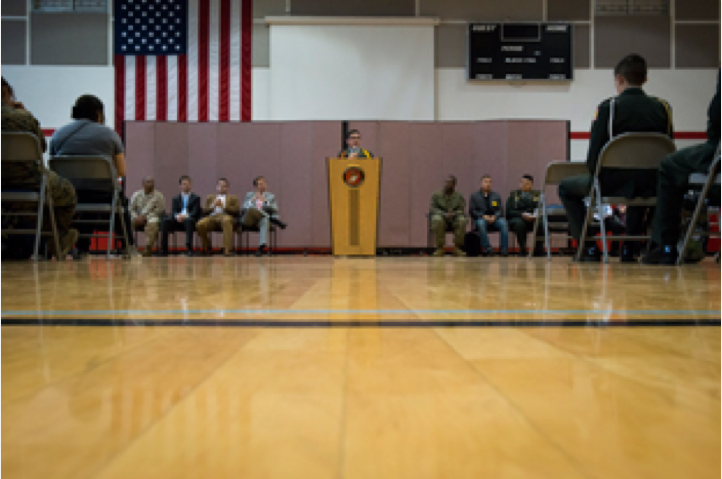 Over 200 Chicago Public School cadets, veterans, active servicemen and women, as well as community leaders gathered at Marine Math and Science Academy on May 28 asking Senator Mark Kirk to support an immigration reform. The event was sponsored by the Illinois Coalition for Immigrant and Refugee Rights (ICIRR).

“Some of these students travel over an hour,” said Todd Connor, Executive Director of Military Programs at CPS. He explained that many of the students who attend a military high school choose to and travel a long way to get to school. “We believe they deserve to go to the military, go to college,” said Connor in reference to the students who cannot serve their country because they are undocumented.

“If I did this, I can get there,” said Alejandro Morales, a graduate of Marine Math and Science Academy. “Unfortunately, I can’t; I am undocumented. I was brought to this country when I was seven months old.”

Morales has a dream to become the first-ever Hispanic Commandant of the U.S. Marine Corps. “He led the entire JROTC program Citywide, the Top Cadet,” said Connor in reference to Morales.

Morales’ dream depends on a change in the immigration reform. “I am Mexican. I am American at heart. I want to serve this country,” said Morales.

Video: New documentary promises to separate the myth from the man who was Puerto Rico's most famous salsa sonero - Chamaco Ramírez
Comment
Peru’s native languages are fighting for survival