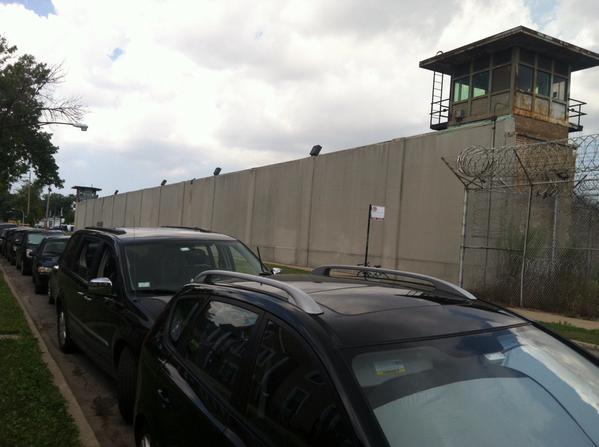 There was a row of about 50 cars parked on half mile the stretch of Sacramento Avenue that sits next to Cook County Jail last Saturday. There were a few white cars but the majority of them were black and brown. The cars were there to visualize the racial makeup of the jail’s inmate population.

They all had their window’s open and their radios tuned to Vocalo 90.7, which was blasting a recording of B.B. King’s 1970 performance “Live in Cook County Jail.” In between King’s slick blues riffs Vocalo also broadcast personal memories and stories connected to the history of the Cook County Jail in relation to Little Village and Chicago’s West Side communities.

“This brings awareness to this situation,” said Len Dominguez as he was standing next to his black car in the hot summer sun. “I think for that reason alone it’s a wonderful thing. It’s a visual representation of the numbers in the jail, which don’t make sense in terms of society.”

The large-scale data visualization, public art, and radio broadcast event was called PARK and was presented by artist Landon Brown working alongside with Chicago-based arts project 96 Acres, which aims to host a series of community-engaged, site-responsive art projects that address the impact of the Cook County Jail on Chicago’s West Side.

“The specific nature of the broadcast, both the stories about the jail but also the B.B. King performance that happened inside the jail, was a way of inverting that inside, outside dynamic via narrative and history,” said Brown.

The Cook County Department of Corrections sits on 96 acres and is one of the largest pre-detention facilities in the United States. Primarily holding pre-trial detainees, the jail admits approximately roughly 100,000 inmates annually and averages a daily population of 9,000.

The typical inmate admitted to, and discharged from, the Cook County Jail is…