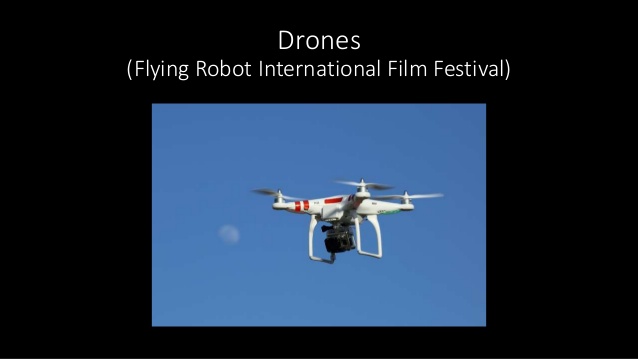 SAN FRANCISCO — The winner of the “drones for good” category of the first Flying Robot International Film Festival shows Mark Jacobson using humanitarian drones to “end the use of starvation and medical deprivation as weapons of war.”

In the video, Jacobson and others with the Syria Airlift Project can be seen airlifting life-saving supplies into war zones in Syria via drones.

Other categories at the festival of 20 short videos shown Thursday at the Roxie Theater included Cinematic, Narrative, Student Film, I Made That!, WTF LOL, Aerial Sports, and Drones For Good.

Perhaps most provoking was a video called “Compilation,” the winner of “I Made That!” category in which the five minute clip shows Dutch drone enthusiast and apparent taxidermist aficionado Bart Jansen turning his deceased cat – as well as an ostrich, shark, and rat – into a flying drones.

“It’s a ‘what-am-I-looking-at’ kind of situation,” said Flying Robot’s founder, Eddie Codel, who is a Mission resident.   All of the animals were dead long before they were transformed into drones, he added.

“There’s different purposes and niches that have been created around drones – I wanted to highlight some of the things that normally don’t get a lot of attention at other film festivals,” he said.

The act of building and repairing drones, he said, is part of the technology’s riveting fascination for many “dronies.”

The “aerial cinema” festival was the first of of its kind on the West Coast, and while privacy and public safety concerns continue to narrate the conversation around drones, Flying Robot, focused on the technology’s unprecedented cinematic and humanitarian uses.

“I truly feel that festivals like this are bridging the gap in showing that art and creativity can be captured with a drone by telling stories in a ways that we weren’t able to several years ago,” said aerial videographer Christopher Saad. “We want to show the public that they can be used for amazing things, for humanitarian reasons…