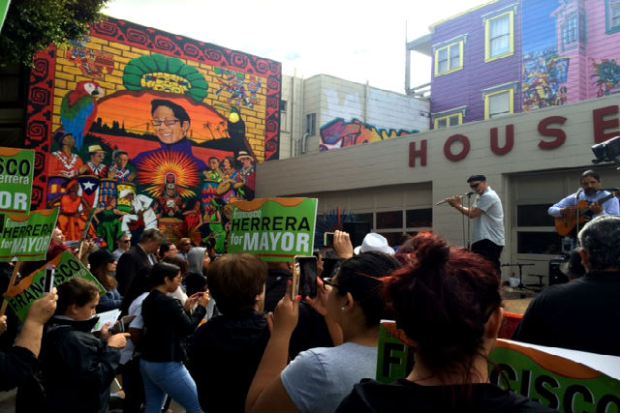 As local musicians, poets, housing advocates and community members joined forces in commemorating one of the Mission District’s most beloved voices this Saturday, Carlos “Kookie” Gonzalez stood among his peers before a colorful mural at 24th and South Van Ness Streets, carefully observing his work.

“This mural is a stance against big business and big money,” the local muralist and retired juvenile probation officer said during the mural’s unveiling, which also served as an anti-displacement rally. “It greets the techies coming off BART into their new luxury apartments in the Mission, and for those of us who are still here, it portrays everything that ‘Chata’ represented in this community.”

Gonzalez referred to Micaela “Chata” Gutierrez, the woman depicted in the new mural on a wall facing West at the corner of 24th and South Van Ness. It overlooks a lot where, throughout the course of the day, people of all ages stopped to protest evictions, partake in a community concert, and honor Gutierrez by dancing rumba under her portrait. Short haired, with glasses and a tight smile, the popular radio host and DJ was a local hero who died in 2013 after a decade-long battle with liver cancer.

“Chata was always willing to help out — she was there for the community and opened up the station to talk about issues that affected us, such as police brutality, unemployment, education,” said Gonzalez about the influential radio personality who, for more than 40 years, worked as an activist and exposed generations of listeners to salsa, Latin Jazz, and rumba through her show “Con Clave” on KPOO 85.5 FM.

“At the same time she played the baddest salsa,” said Gonzalez. “I’ve been hearing her voice throughout my life as a young man coming up in the Mission District, and she was a true inspiration to so many of us.”

The idea for a mural came …