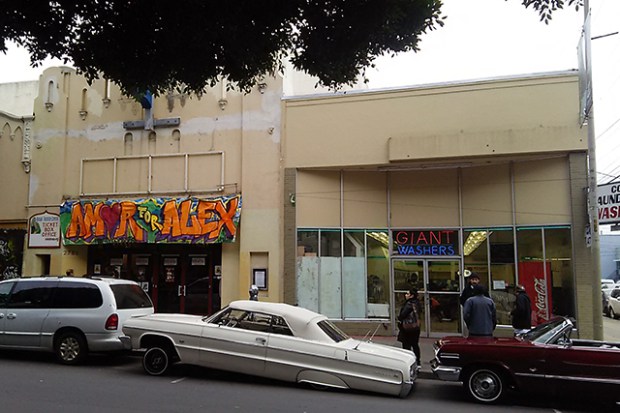 The Brava Theater was adorned Sunday afternoon with a banner declaring “Amor for Alex” during the screening of a new film examining the fatal police shooting of 28-year-old Alex Nieto in 2014.

Supporters of the movement to denounce the shooting walked past a string of highly polished low-riders that sat outside the theater before going in for the entirely volunteer-produced half-hour film. “Low Rider Lawyers: Putting the City on Trial” imagines the jury trial in Nieto’s family’s case against the city, which is set for later this year.

Written and directed by activist and city college instructor Benjamin Bac Sierra, filmed and edited by Peter Menchini, it features prominent community members Edwin Lindo, a candidate for District 9 supervisor, organizer Adriana Camarena and Father Richard Smith.  The film retells the events leading up to Nieto’s shooting on Bernal Hill in the form of a cross-examination of witnesses by a crew of “Low Rider Lawyers,” from the Mission.  The jury is comprised of neighborhood community members.

The film begins indoors, at what appears to be a courtroom. But the cross-examination moves outdoors, and ends in a lowrider’s car in which Smith, playing an officer, is riding in the back seat behind a chain link partition. As he sits there, Bac Sierra asks him questions including why he killed Nieto and whether he is ashamed for his actions…

featured, film, filmmaking, law enforcement, social justice
Previous Post DHS Secretary speaks out about deportation raids as children and parents are rounded up
Next PostMore Mexicans are leaving the US than coming across the border