The new season of the hit bicultural docu-reality Quiero Mi Boda will continue to spotlight the trials and tribulations of bicultural couples as they prepare to tie the knot.

The show brings into focus the excitement of planning this important day in the lives of these esposos-to-be – as well as the real-life challenges that they face during this exciting and emotionally charged time. 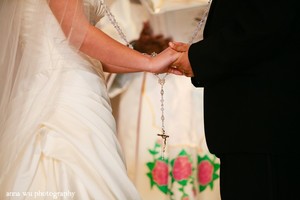 For young Hispanics born in the U.S. or those who grew up in the states, they may experience many culturally-driven family conflicts. According to Simmons, nearly 1 in 3 Hispanics 18 to 29 were born in the U.S. and have at least one foreign-born parent.

For those getting married, it can be difficult to negotiate how much American tradition and how much of their original cultural traditions to incorporate into a wedding. Having a mariachi band perform may be the norm for parents from Mexico, while a young bride might prefer a DJ who plays Pitbull.

The guest list can also be another source of intergenerational turmoil. In Latin America, a wedding is often a huge celebration that everyone in the pueblo can be a part of. It’s a source of pride for parents to include as many people as possible on their child’s special day.

In the U.S., where the average wedding has 138 guests, a large guest list can mean a huge price tag. Many couples also want to feel like it’s their party, not their parents’, and they want to know the people in attendance.

Wedding planning can also highlight cultural differences within couples. According to a Pew Research study, over 1 in 4 Hispanics today marry someone of a different race or ethnicity. Much like within families, compromise about how much of each person’s cultural background to incorporate is a necessity. But at the same time, being different is cooler today than in the past — and these differences can open up creative options where both cultures’ music, food, music, and other traditions can be combined and celebrated.

The tough economy plays a role in many couples’ wedding plans – and for many Latino couples it can mean having a more American wedding than they originally hoped for. Banquet hall packages are generally cheaper than going through separate vendors, but offer less flexible options. The menus are often American or Italian, so couples who choose this route often sacrifice the big buffet of Latin food (as well as other traditions) for the sake of saving time and money.

One emerging trend is that some couples are entertaining their guests with a performance of their own. Much like the “surprise dance” at quinceañeras, some brides and grooms take dance classes, purchase costumes, and put on a show during the reception. Others opt to sing a song as a special surprise; some even do a comedy act.

As a new generation of Latinos shapes U.S. culture, they are also reshaping the traditions of their home countries by combining them with others. Weddings may almost always be fraught with conflict — but out of this conflict, new traditions are emerging.