Latina Lista: News from the Latinx perspective > Culture > Music > Binational project brings the voices of Chicanas and Jarochas together in song

LatinaLista — What happens when musical composers from the United States and Mexico get together? Well, in addition to creating beautiful music they open up a new transborder dialogue spoken through song. 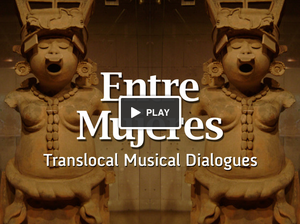 That’s the premise of a new binational initiative known as Entre Mujeres: Translocal Musical Dialogues. Entre Mujeres is a translocal music composition project between Chicanas/Latinas in the U.S. and Jarochas/Mexican female musicians in Mexico. It’s main goal is to document the presence of women in music movements but it’s also a way to document an aspect of female musicians’ lives never before closely looked at.

Through their compositions, the women, from both sides of the border, incorporate the challenges of womanhood and/or motherhood and their feelings on a range of issues from politics and love to their life experiences, in their lyrics. Through public performances, the women share their compositions with audiences.

Entre Mujeres is the brainchild of Martha Gonzalez, a self-described Chicana artivista (artist/activist). The project was inspired by Gonzalez’s Fulbright Garcia-Robles fellowship in 2007-2008, which centered on her research on transnational musical social movements across the Americas and Europe “with a specific focus on innovations of women in the music and dance in the genre of son Jarocho.”

Gonzalez’s research inspired her to share the talents of the women she came in contact with during her fellowship. The easiest way to do that is to put the music on CDs. Yet, it takes money to buy the CDs. To help pay for the mixing, mastering, printing and pressing of 1000 CDs, Gonzalez created a Kickstarter campaign.

She hopes to sell the CDs to recoup some of the expenses incurred thus far and to have a little extra left over to create promotional materials for the project.

But that’s not the end of the story.

Gonzalez foresees taking the women who can make it around the country on mini tours.

“Ultimately it is our hope that Entre Mujeres Project collective knowledge and or “sung theories” will reach a wide audience whom will cherish and enjoy the talent and great wisdom mothers, daughters and sisters have to offer via the power of music,” Gonzalez said.

The deadline for the Kickstarter project has six days left.