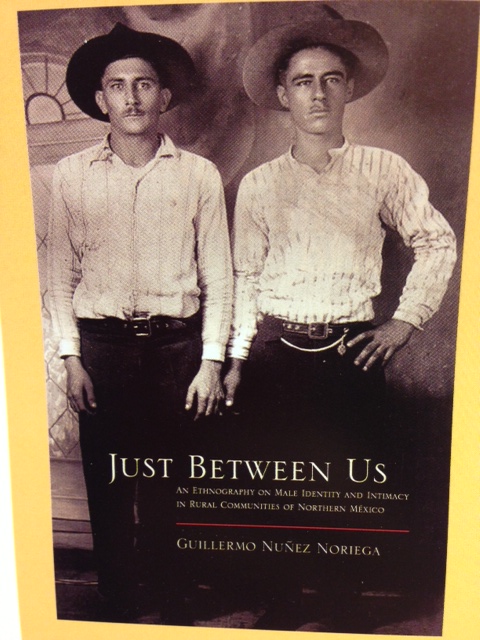 It starts with a photograph. Two men pose for a portrait, lightly, but affectionately, holding hands. The pose might not seem extraordinary today, but this photo, taken around 1935 in Douglas, Arizona, features two Sonoran men in typical rancho attire. For the modern viewer, there is a dissonance between the traditional Mexican masculinity these men display and their unhidden gesture that today would be considered romantic in nature.

A romantic reading of this image, however, is not the only possibility. This photograph graces the cover of Just Between Us: An Ethnography of Male Identity and Intimacy in Rural Communities of Northern Mexico because the ambiguity of the men’s relationship provides an apt introduction to this scholarly work.

Author Guillermo Nuñez Noriega employs anthropological techniques, including interviews and participant observation, to further his understanding of this complex topic.

The result is a book that explores “the field of possibilities for the social actions of men, especially those acts of friendship, affection, and eroticism with other men.” The text alternates between academic theory and field notes from Nuñez Noriega’s time in rural Sonoran communities, the latter of which is infinitely more readable for the layperson.

We learn that relationships between men in this region can be ambiguous and complex, and that the labels “gay” and “straight” often do not apply. This insight is enlightening for readers more familiar with male identity and sexual orientation in a North American context.

While the specificity of its topic may preclude this book from having broad appeal for non-scholarly readers, Just Between Us makes an important contribution to studies of masculinity and sexuality.