Latina Lista: News from the Latinx perspective > Culture > Art > Only requirement for new presidential straw poll is to be a comic book fan

LatinaLista — Straw polls are like the heart monitors of political candidates. How a candidate fares in a straw poll usually is a good indication of how much life is left in the campaign according to a select group of voters. 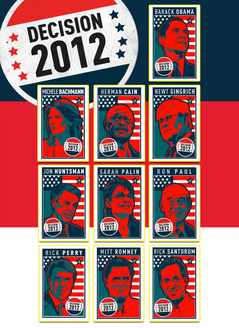 The latest group to participate in a straw poll may have some members who aren’t even old enough to vote, but they can read — comic books.

For the first time ever, the comic book industry is getting into the straw poll business with a unique twist. Boom! Studios has created Decision 2012, a series of biographical comic books of each of the top 2012 presidential candidates. Each comic book sells for $3.99. The candidate whose comic book has the largest print run wins the straw poll.

“The DECISION 2012 line of comic books has something for everyone,” said Chip Mosher, marketing and sales director of Boom! Studios. “For those political junkies that love a good horse race, we have comic book’s first straw poll. For those voters and our young soon-to-be-voters, we have some great non-partisan biographical comics on all the major candidates – announced and waiting to be announced – in the 2012 presidential race. And finally, for the comic book collector, we have a fantastic once-in-a-lifetime collectible. The DECISION 2012 comic line and comic book’s first straw poll is a great way to spotlight the upcoming 2012 election and get people excited about voting!”

The winner of the comic book straw poll will be announced this November and so straw poll participants are asked to pre-order the comic book of their favorite political candidate at their local comic bookstore by September 29, 2011.

According to straw poll organizers, if a candidate’s comic book does not get pre-ordered by at least 1,500 copies then it won’t be printed.