LatinaLista — According to journalist and educator Miguel Perez, 2013 is a very important year for the United States — it’s the 500th anniversary of the nation’s discovery. Not by Christopher Columbus nor British colonists but by a Spanish conquistador named Juan Ponce de León. 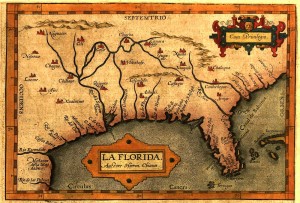 As Perez says: “Ponce de Leon did not discover Florida because it didn’t exist as a state, he discovered what is now the United States, but he is not given credit for that…”

It’s this example, among hundreds of others, where historians have virtually ignored the true discoveries and contributions of Latinos to US history, that propelled Perez to do something to set the historical record straight.

On the site, Perez shares a web book he is working on dispelling the myths that surround US history and Latinos. Via videos, archived columns he has written for his syndicated column and ongoing research, Perez shares tidbits of US history that both fascinates and puzzles as to why the information is not more widely learned in our schools’ history books.

Exploring topics ranging from “Our Spanish Heritage” to “We are all Americanos,” Perez vows to reconnect Americans with their Hispanic roots. And for conspiracy buffs, Perez uncovered the madre of all conspiracies that he says is known as “The Black Legend.”

“…Many Americans simply don’t know that Latinos have a very long history of planting language and cultural roots in what is now U.S. territory. Latinos also have a huge record of very positive and unappreciated contributions to American society.”

At that time, I vowed that, “In the interest of reawakening perhaps-lost knowledge and reminding my fellow Americans that Latinos should not be assumed to be illegal immigrants or even foreigners,” my column would occasionally “rewind to the past to fill the gaps in the history books and the classrooms and to explain why Latinos have many reasons to be proud Americans.”

Five years and 26 history columns later, that commitment has turned into this web site.