LatinaLista — For the first time, a study on how well Latino students are doing in school takes into account the impact of anti-immigrant hysteria sweeping the country. 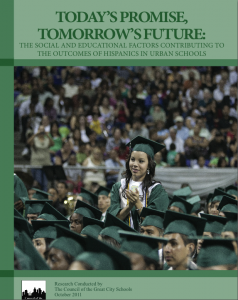 The study, Today’s Promise, Tomorrow’s Future: The Social and Educational Factors Contributing to the Educational Outcomes of Hispanics in Urban Schools, published by the Council of the Great City Schools, cites how in addition to the more well known reasons holding a portion of Latino students back from educational success — more Latino children living below the poverty line, not likely to have health insurance, nor access to preschool services and not having a parent who has graduated from high school — the report also takes into account the national immigration debate.

(Hispanic students) face constant suspicions about whether they are in the country legally.

The growth over the past decade for both Hispanics and ELLs has outpaced the general population growth and the growth in school age children. Specifically, according to the Department of Education, the number of all pre-K-12 students increased by 8.5 percent, from 46.0 million in 1997-1998 to 49.9 million in 2007-2008, and the number of ELL students increased by 53.2 percent (from 3.5 million to 5.3 million) in the same period.

Yet, when it came to fourth grade math, it was a different story:

But, as everyone knows, school isn’t just about the academics. It’s also what happens inside and outside of school that charts future success. Latino students can’t seem to get ahead:

Given the fact that in many urban school districts across the country the majority of the students are Latino, this report underscores the crisis that is happening now with Latino students.

Though the report doesn’t offer concrete solutions to the learning gap between Latino students and their peers, it highlights the areas where under-performing Latino youth need help, intervention and guidance to achieve, succeed and be on track to be a fully contributing member of society in the future.