Latina Lista: News from the Latinx perspective > Culture > FRIENDS of the National Museum of the American Latino asks public’s help to vote for 2013 campaign design

LatinaLista — The reality of a National Museum of the American Latino is still only a dream. Though the recent introduction of the bipartisan Smithsonian American Latino Museum Act was a positive sign in getting Congress to establish a national museum for Latinos, there’s still a lot of work to be done. 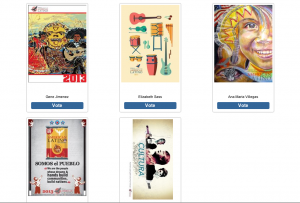 The work to drum up more support for the museum falls on the shoulders of the Friends of the American Latino Museum. A group of hard-working men and women who sit on the museum’s board. Each year, this is only the second year, the FRIENDS create a national campaign to raise awareness about the museum and its purpose.

A big part of the campaigns is the image illustrating it. As they did last year, the FRIENDS sent out a national call to artists to submit an image in a contest where the winning drawing would be the design for the 2013 campaign. Their call netted them some fantastic drawings by talented artists and it was up to the FRIENDS to whittle down the submissions to only five.

Now, the FRIENDS are saying it’s up to the Latino community to choose which design will be the image of this year’s campaign. Until April 25, readers are invited to vote for one of the five finalist drawings.

The winning artist will receive a trip to Washington, D.C. for an unveiling ceremony along with national exposure for their work, and an important role in the historic campaign to build a National American Latino Museum in our nation’s capital.

In a press release, a little background was featured on each of the finalists: