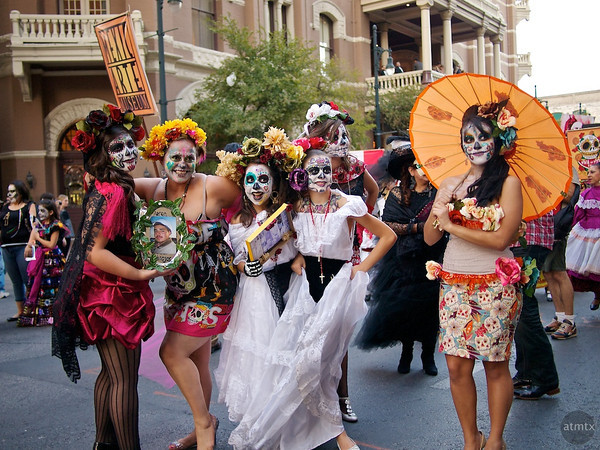 Mexicans, more than most races, seem preoccupied with death. Since colonial times, Mexican laborers have continuously been uprooted, travelling thousands of miles from the interior of Mexico forging an El Camino Real to mining camps and plantations in northern Mexico. They arrived in places like Zacatecas where they fanned out, forging spider web corridors in the form of roads.

These workers felt vulnerable. They missed home, and most knew that they would never see their homes or families again.

La Cancion Mixteca written in 1912 in Mexico City by José López Alavez, a Oaxacan composer, speaks to feelings of homesickness for Oaxaca. The song was later taken north to places such as Chicago where it became a favorite of Mexican migrants in the United States.

How far I am from the land where I was born!
Immense nostalgia invades my thoughts;
And seeing myself so lonely and sad like a leaf in the wind,
I want to cry, I want to die from this feeling.
Oh Land of the Sun! I yearn to see you!

In studying the history of Arizona miners, I found it was common among these laborers to form mutualistas (Mutual Aid societies). Mineros wanted to care for their families in case they died before seeing the land of the sun. It was an insurance collective that would bury the member on a plot of land, and mark the grave with a cross.

Traveling around the Southwest today, you see crosses on the side of roads with flowers and photos of young children and adults who were killed by a motorist. Often their families don’t have the funds to bury them. The practice of building makeshift altars is also spreading to urban spaces where it is being adopted by other ethnic and racial groups.

I often think of death not because I believe in an afterlife but because I want to remember and to be remembered much like I remember my parents and my grandparents.

The truth be told, your love ones will live for as long as you remember them. On the 31st of October, the yearly festivities begin for Americans with a round of commemorative days — All Saints’ Day, All Souls’ Day, and the Day of the Dead.

Mexicans and Latinos will memorialize their dead on these days differently than their neighbors.

As a kid, these religious days meant that we got a religious holiday. At least for me, the days had very little meaning. Halloween fell on the 31st of October, a day that we went trick or treating, accumulating mounds of candy that surely contributed to our tooth decay and diabetes.

Every year, Halloween seems to have less and less meaning for most Americans; its only function is to feed their superstitions and multiply candy and costume sales.

On this day, death is portrayed by witches, black cats, and omens, with young and old alike going to haunted houses. Americans enjoy being scared. It epitomizes a fear of death – a sort of Friday the 13th.

Mexicans and other Latinos join in on the fun; they get free candy and get to dress up like Casper the friendly ghost. Some white Americans try to be funny and dress like Mexicans.

The closest thing to a Mexican version of Halloween is the horror story about El Cucuy that is told children to keep them in line. It is the Mexican version of the boogeyman that is in search of victims. Significantly, the Cucuy is a Spanish invention, originating in Portugal and Galicia and transported to the Americas.

El Día de los Muertos is more profound. In places like Los Angeles, San Antonio and Chicago, it is a day of remembrance. As the Mexican population increases, it is spreading and infiltrating the popular culture. Unlike Halloween, it has little to do with “me.”

During El Día de los Muertos, we design altars and adorn them with pictures of loved ones, their favorite foods, and other items. Their favorite music is played.

The Day resembles Sunday at a cemetery where entire Mexican families show up and visit their dead, clean the gravestones of their parents and loved ones, and visit them. They may be dead but they are remembered.

I don’t want to go into a historical narrative about El Día de los Muertos, only that it is millenniums old. With Mexicans, it is rooted in their indigenous past, and it was later appropriated by Spanish Catholicism.

The celebration goes beyond trick or treating or scaring the hell out of someone. As Carlin said, when you are dead, you are dead.

The truth be told, I am writing a book about these themes. If I ever finish it, I will call it “My Journey out of Purgatory.” Although the Catholic Church no longer believes in purgatory, it is my most vivid memory of my childhood – the thought of burning for eternity because you were not remembered and prayed; it scared me.

Today I write books and articles because I want to be remembered. I don’t want to die without leaving my footprints, giving testimony to my existence and reminding people that I was here.

However, my greatest fear is that El Día de los Muertos is growing so popular, at least in the Southwest and other places where Mexicans live, that it will be commoditized.

This Friday and into the weekend there will be numerous festivities at colleges, schools and public places such as Olvera Street.

El Día goes beyond the land of the sun and nostalgia; people are seeking to profit from it; something that will make it meaningless.

Touring the various altars, I will remember colleagues such as Roberto Sifuentes, Shirlene Soto, and Lorenzo Flores as well as students such as Teri Orozco, Martin Cano and Mario Muñiz who are alive because we remember them.

Will El Día de los Muertos become another Halloween or another Cinco de Mayo where people celebrate it without really remembering?

The American capitalist culture is rapidly co-opting lo mexicano. Will it suffer the fate of the Cinco de Mayo that has become one big happy hour with local strip joints selling Cinco de Mayo margaritas?

El Día los Muertos belongs to us and our memories, let’s see how long it takes for it to be franchised by Disney.