By Gail Pérez
La Prensa San Diego
SAN DIEGO — In 1970 when the Chicano community took over the land under the Coronado Bridge and demanded that a long-promised park finally be constructed in the Logan Heights neighborhood, park activist José Gómez announced to the world that anyone attempting to take the land from the community would have to “wade through our blood.” 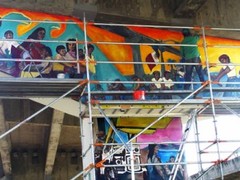 On any given day in Chicano Park, his words sound far away. The park is mostly quiet –a flock of elementary students following their teacher to playground swings, so-called homeless folks relaxing on benches, and José Mendoza tending the remarkable stand of roses at the base of La Virgen de las Americas mural.

Guillermo Rosette up in the air painting the sky on fire for the Chicano Park Take-over mural restoration.
(Photo: David Avalos)

Many of the most historic murals from 1973-1975 like Women Hold Up Half of Heaven are fading and damaged. But on June 20, 2011, five of the original artists — Felipe Adame, Victor Ochoa, Norma Montoya, Guillermo Rosette, and Michael Schnorr — put paint to concrete and began the most ambitious restoration project in the park’s history.

After eleven years of wading through bureaucratic red tape, a $1.6 million federal grant, approved in 2002, has finally been implemented with the cooperation of the Chicano Park Steering Committee.

Guillermo Rosette, restoring the Chicano Park Takeover mural, defines this moment’s importance: “In history, we are the first artists to restore our own murals.” Rosette worked on the very first murals in 1973, and he brings the memory of that time to restore not only the vivid orange sky of the mural but also its significance and energy.

Unlike other important mural projects in Mexico during the Revolution and in the US during the New Deal, Chicano Park muralism is grassroots; yet it has become one of the most important sites in the world. The people power that Rosette’s mural memorializes — the community’s direct action to take the land — is the same spirit responsible for the artwork.

The murals are inseparable from the community struggle that Victor Ochoa calls the “Chicano democratic dynamic,” the collective process that has guided the preservation and now restoration of the park in spite of inevitable conflicts.

As Felipe Adame asserts, “In the 1970’s, we were giving life to the culture. We were making a link between past and present. It was a cultural renaissance.” The presence of these original artists involves not only a new coat of paint, but also a deeper understanding of the ongoing need to preserve the community, understand our history, and maintain our culture. Those who visit the park during the yearlong restoration period will have a remarkable chance to learn from these artists/activists.

The long story of this Federal Transportation Enhancement Activities grant, should be viewed as the latest chapter in the struggle for a working partnership between community and city and state authorities that began as early as the re-zoning of Logan Heights for “light industry” and junkyards in the 1950’s…