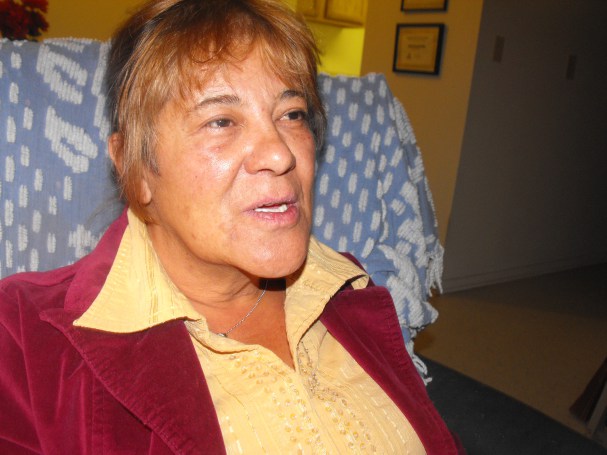 Comrade, then I saw you – and my eyes are even now filled with pride.

Almost ninety years ago, in 1924 or’25, a young girl left the Mexican border town of Agua Pieta, which sits on the northern edge of Sonora facing Douglas, Arizona and walked a few miles into the United States. Visibly pregnant, she travelled alone.

She passed quickly through the small town, reaching a dusty highway as a bus appeared in the distance. Hours later, as evening began to fall over the southwestern mountains of New Mexico, the bus pulled into Silver City, where Otilla joined two distant uncles. The men had found work at Arizona’s Santa Rita Mine, not far from the state line, and had agreed to provide several months of shelter until Otilla could get on her feet.

The two miners were actually Otilla’s second or third cousins ; thus, her family had been careful to make no claims on them. The girl’s sudden adult status had been made very clear to her; still, it was not until Otilla climbed into her little mattress for her first night in America that she felt the full weight of complete and immediate responsibility

The large Gallegos family was essentially destitute; in fact barely surviving. Life was measured out in days, and days were calculated by small fistfuls of beans and corn. Otilla could see for herself that the two uncles, whom she barely knew, worked under terrible conditions to support their own desperate families back in Agua Pieta.

Otilla understood all of this. Whatever she could not understand, she kept to herself.

Today, the Mexican border city of Agua Pieta has a population of 200,000, but the poverty is just as crushing as it was in 1925. The US deports busloads of people to the city daily, leaving them stranded thousands of miles from their original homes in southern Mexico, Guatemala, Honduras, Nicaragua, El Salvador, and Panama.

But Agua Pieta is also an old city, with a population of many generations, and a center of massive 16th century Spanish colonial structures. The city was one of Pancho Villa’s loyal strongholds during the Mexican Revolution. A few miles from the 450-year-old palaces and cathedrals, the modest ranch houses of the much, much younger small town of Douglas, Arizona can be seen on the other side of the border fence

This, then, was life, looking straight at Ottilla Gallegos and telling her she had no time to lose. Early on the morning after her arrival, she went looking for a job, a slight, pretty fourteen-year old who couldn’t pass for even fifteen, making her way along Silver City’s Main St preceded by her protruding belly.

She had a chance to cook and another to do laundry, so Otilla’s job choices surprised her uncles: she hired on as part of a crew laying Silver City’s first concrete sidewalks. People might have stared at her disapprovingly that first day, but an obviously pregnant child performing heavy labor in public week after week was something else entirely. T

hey found themselves looking away, a fact of which Otilla took note. We know this because she made a point of telling the story, as I am telling it now, to each of her four children.

Otilla worked harder as her delivery date loomed ever closer – until her boss and co-workers just couldn’t stand it, begged her to stop, and took up a collection to cover a week’s wages. Otilla took her money, went to her uncle’s apartment and got into bed.

Otilla’s children passed this story down to their own children with the same care: in fact, it’s one of the first things her descendents will tell you about Otilla Gallegos.

“She passed the torch to our parents and they passed it to us. She worked harder than anyone I have ever met, she gave her life away in labor to the Anglos, yet she was treated as if she were nothing – as if her labor belonged to them,” Patricia Medina told me as she whacked the dust out of a rug with an old broom last week.

Medina is one of Gallegos’ many grandchildren, and is herself a grandmother. She recently lost her home in Las Lunas after forty years of labor and moved to a public housing project two hours south. At age 55, she is back at work as a housekeeper, unable to live on the disability payments she had thought would allow her to retire early. But on the day I met her, Medina’s primary concern about the job was not its impact on her injured spine, knees and neck; her hope was for more assigned work hours, leading to a full-time position.

“I come from a long line of poor people,” Medina said. “ We expect to be called lazy, we expect people to point to us and say we haven’t made progress in three or four generations like good Latinos should. We never expect justice. But that doesn’t mean we accept injustice! Oh no. No, no. We fight the battles we have a chance of winning. If not, we do what needs to be done. That is how we remain free.”

We were draping her heavy rug over a fence that seperates the housing project from a gravel pit, but Medina paused for a moment to peer at me.

She waved a hand in a gesture that managed to be both dismissive and polite.

“These Anglos don’t know what hard work is,” Medina said, and gave the rug a huge, final whack. She tosses the broom into the back of her rattling grey van.

“Come with me to the Dollar Store, chica,” she said as she climbed in.

“No enchiladas for you, gringa loco,” Medina said. “For you, there will only be very, very hot chiles. And nothing at all to drink.”

“Ha, ha,” I said. “That gets funnier every time you say it. And your engine light is on again.”

Medina cursed as we peeled out of the Projects parking lot. Her son has been warning her that her van will die “any minute now, Mom.” But she still drives like a maniac.

Life in Silver City was not easy for Latino people. Almost all who flocked to work the mines of the mountain town were of Mexican descent, but at least half of them had never been south of the Rio Grande. Their roots were deep in New Mexico. As for Mexican nationals, they saw themselves in the same nation.

Anglos didn’t care about such distinctions, they just knew a Mexican when they saw one, and lumped everyone together.

Juggling this surreal and frankly traumatic contradiction was part of the price of dealing with Anglos. Essentially, Latinos were allowed to live and work in their own land because they were cheap labor – and they were reminded of that every day in countless ways.

Each of Ortilla’s children grew up fast and had large families – Medina has 30 cousins – and all of them struggled. Her uncles worked in the mines, and 26 years after their mother had laid her first slab of concrete, there was still no electricity or water in the shacks that were their homes. The mining company housing was intended to keep Latinos out of Silver City proper as much as possible, and they were segregated when they did make the short trip in.

White miners lived in seperate housing equipped with plumbing and electricity. They worked in separate crews doing the best jobs during the best hours, and received almost twice the pay of Latino miners. They were even provided a separate pay window so that they wouldn’t have to stand in line with Latino miners.

Something had to give. And it did.

In 1953, the Latino miners of Silver City astonished both the mining industry and the labor movement by striking. Latino workers had long been viewed as too passive to pose a threat to the former nor to play a leading role in the latter.

Not only did they strike, but they won – and they did it during a period when most of the Left was, well, hiding out.

Not only did they win, but they did that by relying upon Silver City’s Latino women. Another gripe the labor movement had with Latino workers was the hopelessly traditional gender roles from which they could never be budged.

Ha!. Yet another stereotype smashed.

Just a few months after the miner’s victory in early 1954, a trio of filmmakers arrived in Silver City. They had been blacklisted by Hollywood’s shameless capitulation to the McCarthy Era’s communist witch hunts, but their supporters had secretly raised enough money to fund a modest budget – and they aimed to spend it on a film about the Empire Zinc Mine. The name of the film was the Salt of the Earth.

It was the only film that has ever been banned by and from the United States . While it circled the globe winning one award after another, Americans remained generally unaware of it. Those who did learn about the film were remarkably uninterested, as the nation was absorbed with backyard bomb shelters, electrocuting Jewish spies, and hunting down the terrorist wave of TV and movie writers hiding out in Hollywood’s labyrinth of secret communist cells.

The Salt of the Earth made history in more ways than one. The miners wrote much of the script, rejected whatever they believed did not represent them, acted, and coordinated publicity efforts.

Only three professional actors were used. The leading lady was deported to Mexico before shooting was completed and the leading man was a Latino miner. The production crew was shot at, and government helicopters hovered over the set. The filmmakers finally had to make a run for it in the middle of the night.

The Salt of the Earth also became a proud part of the Gallegos-Medina family history.

Two of Otilla’s sons and a daughter acted in the film and worked on the script. And although Patricia Medina wasn’t born until 1959, she traces a direct line straight from her grandmother, uncles and aunt to a lettuce field in northern California in 1973 – and a strong fourteen-year-old girl marching beside Cesar Chavez.

END OF PART ONE

Latina Lista contributor Claire O’Brien is an award-winning journalist based in New Mexico where she writes of the people, history, places and politics she encounters along the way in her exploration of the Land of Enchantment.