LatinaLista — In 2013, PBS will broadcast a 3-hour documentary about the Women’s Movement and its impact over the last half century. Yet, in a move that is new for PBS, the public television network isn’t waiting for the film’s debut to release a web site — it’s doing it now but in a very unique way and with a special partner. 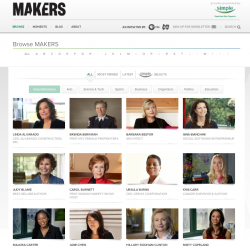 PBS has partnered with AOL in launching MAKERS: Women Who Make America, a digital video and broadcast initiative showcasing the impressive stories of women who have been trailblazers in their own rights. From the arts, education, grassroots organizing and sports to science, politics and business, the women represent all fields where their contributions and presence made and are making a difference for women who have followed in their footsteps.

“It’s exciting to be going after a massive story in a new and wonderfully fine-grained way,” said filmmaker Dyllan McGee, the founder of MAKERS. “My partners, Betsy West and Peter Kunhardt, and I realized there was a need to track and preserve the story of how individuals transform a culture — something that hasn’t been done before on this scale. Our hope is that the new combination of an expanding digital platform rolled out over time, along with a major PBS television broadcast, will ignite sustained dialogue. It’s about how far women have come and where we need to go in the future.”

The goal of Makers is to be the largest but also the most dynamic collection of women’s stories ever assembled.

What’s further unique about the site is that it is formatted to be seen on every kind of mobile device. Since the main emphasis is on the video content — long interviews with each women broken down into a series of short videos — the site creates the illusion of the viewer having an ongoing conversation with the women.

An interactive feature on the platform allows viewers to select attributes that personally inspire them. Clicking on the desired attributes then matches the viewer with the profiles that share those same attributes.

No doubt, MAKERS is a site filled with role models for all women, regardless of age, to aspire to be like. But it’s also a single source that shows the infinite possibilities of what women can achieve and that no woman is really alone in their quest to fulfill their ambitions.

A guide to the creation, rise and rule of Latino gangs in the U.S.

10 ways to honor the sacrifices of U.S. soldiers this Memorial Day weekend at national parks