Latina Lista: News from the Latinx perspective > Culture > Latina entrepreneur does her part to inspire people to vote in presidential election

LatinaLista — Motivating Latinos to vote in the November presidential election is gaining momentum with each new “repeal” promise by the Romney campaign. 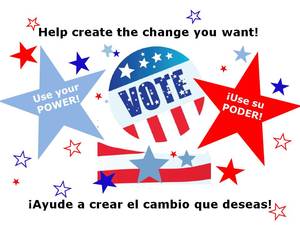 Maybe as a way to inspire the electorate or intimidate critics, some groups are making bold predictions as to the turnout and impact of the Latino vote.

Unfortunately, if it weren’t for one small detail these projections alone should be enough to cause both political parties’ Hispanic outreach coordinators to work overtime to secure the Latino vote. But before this can be accomplished, Latinos actually have to show up at the polls.

While a lot of emphasis has been placed on voter registration drives, not a lot of thought is given to making sure people feel compelled to trek out in the elements, wait in line and cast their vote. In the last presidential election, some who had registered but didn’t vote made the usual excuses: “I didn’t know where to go;” or “I forgot.”

Well, one Latina entrepreneur wants to make sure no one forgets how important their vote is. Ivette Mayo, a Houston entrepreneur who creates her own line of Latina-themed stationery, created a special bilingual postcard for people to send to their friends and family to make sure they realize the power they wield.

“I created the Get OUT and VOTE card because I feel that this upcoming election is of the upmost importance to the Latino community,” Mayo replied in an email. “Anything that I could do to encourage the LATINO VOTER to exercise their VOTE, I will do. Even creating a postcard for people to send to friends y familia to encourage them to do their part.”

Brightly colored in red, white and blue, the festive image highlights the important message of using the power of a vote to create change, or in some cases, to prevent drastic change.

There’s no doubt that anyone who receives this postcard won’t forget how important is their vote, but there’s one more thing Mayo might want to include to drive home the message even further — the date.

That way, there really will not be any excuses.

bilingual, feature, stationery, vote
Previous Post Guest Voz: What Early DACA Application Numbers Tell Us About the Future of the Program
Next PostNew report underscores how Voter ID laws threaten the democratic right of too many youth of color

Guest Voz: What Early DACA Application Numbers Tell Us About the Future of the Program
Comment
New report underscores how Voter ID laws threaten the democratic right of too many youth of color