Latino and Muslim: A growing minority

By Audris Ponce
The Venture
HOUSTON — Latino and Muslim are two words that come charged with various sentiments in American society. Being a Latino Muslim comes with the challenge of facing both religious and ethnic ostracism.

Juan Alvarado was raised Catholic by his Dominican parents but converted to Islam at the end of his college years. 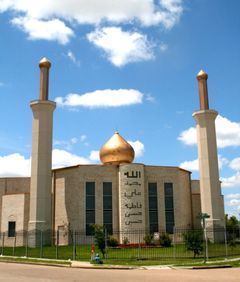 “My father was the one that didn’t like the idea,” Alvarado said.

Alvarado, one of the first in his family to go to college, felt a new sense of independence when he came back home.

A mosque in southwest Houston, a thriving Latino community.
(Photo by: Audris Ponce)

When Alvarado told his parents about his newfound faith, it wasn’t easy for them to accept his conversion, particularly his father.

“He told me, ‘Te lavaron el cerebro.’ ‘You were brainwashed’,” Alvarado said.

Alvarado shared how practices that are commonplace, such as everyone getting days off from work for Christmas, remind him of the difference in his religious beliefs from the majority of the people.

“Sometimes it’s lonely because of that,” Alvarado said. “You are basically a stranger in your own world.”

This difference is especially heightened when it comes to the Latino community, where Christmases filled with posadas and midnight church services.

“Sometimes when I’m in my mosque, and a person doesn’t know who I am starts talking to me in Arabic or Turkish, and I’m like, ‘I’m sorry I don’t speak that’,” Alvarado said.

“But then you feel in that weird in-between-place; you’re not quite part of them,” he said. “You feel tri-cultural, not bicultural: American, Hispanic and Muslim.”

Alvarado is part of two groups whose numbers are consistently growing…

Previous Post Immigrant Archive Project strives to preserve the personal stories of all immigrants
Next PostUSA: "Hermanaly" advice for the first day of college

Immigrant Archive Project strives to preserve the personal stories of all immigrants
Comment
USA: "Hermanaly" advice for the first day of college