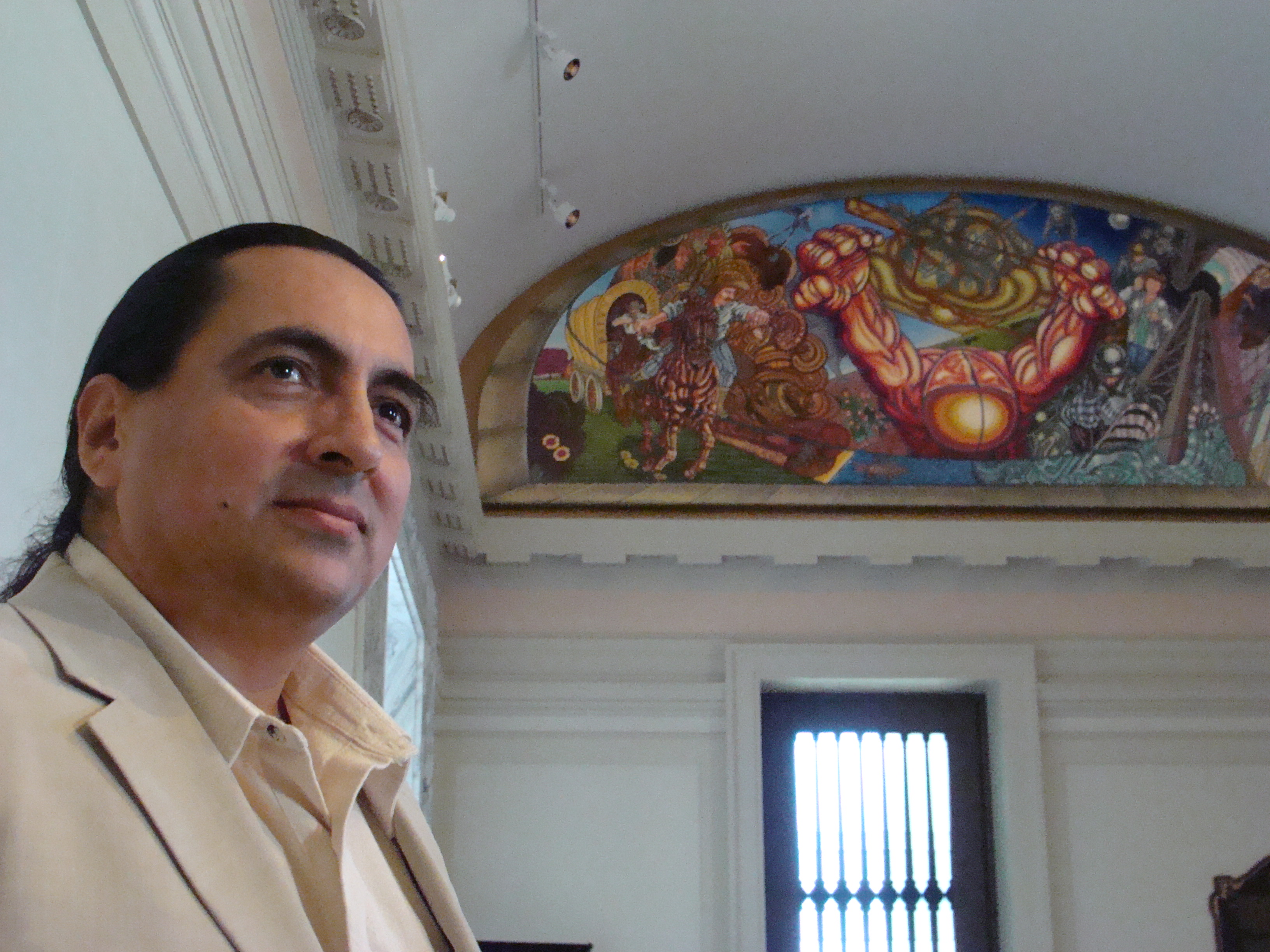 A mural that is the only work of art by a Hispanic artist in the Oklahoma State Capitol brought some controversy three years ago. The work titled ´Beyond the Centennial´ was presented on May 10, 2010, and it depicts every Oklahoman, with a ´Red Man´ who is carrying the state in his hands. He metaphorically lifts Oklahoma, represented by the state´s outline and Osage shield emblem from the state flag.

“Some legislators wanted to take the mural down, just because they did not like it,” said Richard Ellwanger, former Chairman of the Oklahoma State Capitol Preservation Commission, an entity that controls the display of art objects in public areas of the Capitol. “That concern was brought to me by two of the 15 members of the Commission in 2010.”

Those members were Chad Warmington, former Chief of Staff of the House of Representatives and current Chief Operations Officer of the Oklahoma State Chamber, and Paul Ziriax, Secretary of the State Election Board. Both declined to be interviewed about this matter.

Carlos Tello, the creator of the mural who is a native of Mexico and a resident of Oklahoma City since 1992, said that some lawmakers’ comments “demonstrated a profound misunderstanding of art and were loaded with racial overtones.” He added while showing details of his masterpiece that “the mural is not a product of improvisation or chance, but a rigorous and lengthy process.”

The mural, located in the Hall of Governors on the second floor of the building’s rotunda, was the result of five months of studies, meetings, and evaluations of proposals.

Ellwanger explained that “every aspect of the mural was taken into consideration and the art was funded by Friends of the Capitol, a private organization and a non-profit group.”

The Oklahoma Arts Council did not have the final say on the selections of Tello’s work. Joel Gavin, Director of Marketing and Communications, said that the attention given to the mural – yesterday and today – “is exactly the type of healthy discussion that art can and should generate.”

He also added that “the mural is cohesive with the rest of the collection in the State Capitol. It tells the history of Oklahoma and we encourage everyone to visit the Capitol to see the mural in person.”

Tello said that the creation of the mural took him about one year. “It has several elements of the history, the present and the future of Oklahoma,” and he added that “the central figure is a man, as a universal being, painted in red, since the word Oklahoma means precisely that [red men].”

For Tello, the mural is a “manifestation of the fine arts that brings people together for its enjoyment,” and also “follows strict rules that makes it even more beautiful.”

Tello’s mural could be considered as a window of diversity. It represents Oklahoma, a state of immigrants.

The Mural
Beyond the Centennial is located at the half-circle alcove in the Hall of Governors at the Oklahoma State Capitol. It was based on the Centennial theme, “A unique history. An extraordinary future.”

The left section of the mural is a tribute to Oklahoma´s diverse history, wildlife, and natural beauty, the rich and vibrant American Indian heritage, the Land Run ´Sooner´, the Dust Bowl, the bison, the scissortail flycatcher, and the Redbud tree.
The right section symbolizes Oklahoma´s ongoing advancement and future.

Its center showcases a ´Red Man.´

Tello, the artist
A native of Mexico, Carlos Tello received his Bachelor of Arts degree in Graphic Communication from the Metropolitan Autonomous University (UAM) located in Mexico City. He continued his studies at UAM and obtained a Certificate in Airbrush Techniques and took a course on Special Effects in Photomechanics and Lithography. A noted muralist, painter, and potter, Tello relocated to Oklahoma City in 1992.

Guest Voz: Faced with foreclosure, the last thing to do is 'do nothing'
Comment
Intrn'l Video: Argentinian photojournalist creates special project taking people "Back to the Future"