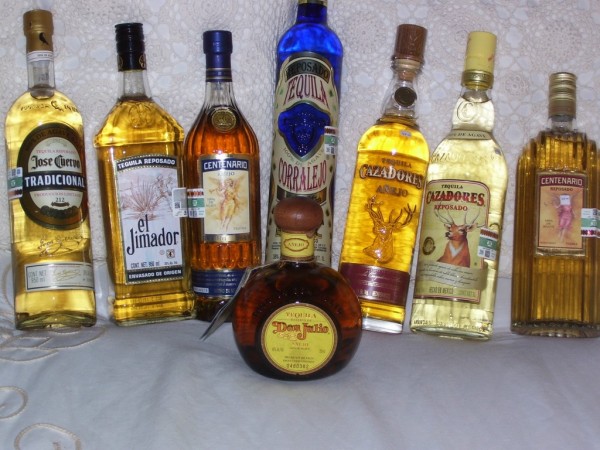 LatinaLista — So what if it took a Latino-themed sports cafe — that looks suspiciously like a popular Anglo chain that uses the same hot pants-clad girls to deliver your order — to come up with an idea that makes us smack the sides of our heads and say, “Why didn’t I think of that?”

Maybe it’s because most of us aren’t in the business of selling tequila or we haven’t drunk enough of the liquid cocoon of those fat gusanos (worms) to think we needed it but thanks to Ojos Locos Sports Cantina (yes, crazy eyes) based in Texas everyone will be looking a little crazier as they celebrate the first National Tequila Awareness Month.

“We love our tequila here at Ojos, so we decided to take it to the next level and create Tequila Awareness Month,” said Eric Salzer, director of operations at Ojos Locos. “We want our guests to experience all the many varieties of tequilas and try something new.”

It’s not like people didn’t already know about tequila. Anyone who has ever had a margarita knows that the main ingredient is tequila.

And over the last few years, there have been other efforts to acquaint people with the original “fire water.”

For example, at Tequila.net where people can get a whole interactive lesson on the subject from learning that there are over 2000 brands of tequila, a map of the distilleries in Mexico that produce it, industry news, and even a global map of where to find tequila bars (guess which country has everyone else beaten in that dept. (hint: it’s not Mexico)), it’s easy to see that tequila has been celebrated all along — it just didn’t have its own month.

Another site that covers the drink but in a no-nonsense manner — kind of like the designated driver of tequila sites — is one called itequila.

At this site, we learn the basic facts about the history of the drink, the different kinds, how it’s made and how it should be drunk.

In 2002 an official tequila glass from the Riedel Glass Company was approved. The glass is 6-3/4 oz and is an elegant slender glass with a tall stem, meant to lift fine tequila to the level it deserves, to accord it the appreciation and respect of which it is worthy, according to Riedel.

But who really drinks tequila that way?

During this first celebration of Tequila Awareness Month, people will probably raise another kind of glass in the air to toast the liquid that forever reminds us of our close relationship with our southern neighbor — the shot glass.

Outside Mexico, a single shot of tequila is often served with salt and a slice of lime. This is called “tequila cruda” and is sometimes referred to as “training wheels,” “lick-sip-suck,” or “lick-shoot-suck” (referring to the way in which the combination of ingredients is imbibed). The drinker moistens the back of their hand below the index finger (usually by licking) and pours on the salt. Then the salt is licked off the hand, the tequila is then drunk and the fruit slice is quickly bitten. It is common for groups of drinkers to do this simultaneously. Drinking tequila in this way is often erroneously called a Tequila Slammer (which is in fact a mix of tequila and carbonated drink). Though the traditional Mexican shot is straight tequila, lime is the fruit of choice when a chaser must be used. It is believed that the salt lessens the “burn” of the tequila and the sour fruit balances and enhances the flavor.

No matter how it’s drunk, there’s no doubt that people will remember this first celebration dedicated to tequila — especially when people start screaming Viva Tequila!

Lawrence Sisters on the Road to Success
1 Comment
Did Texas Republicans try to suppress the state's Latino vote?