Latinos: A Better Life Awaits Us

After seeing one of the best films since Gregory Nava’s El Norte, feelings of
pride and personal connection disappeared when I realized that this powerful film called A Better Life, with an all-Latino cast and already garnering positive reviews, may not be seen by millions of Latinos unless we take action and get the word out.

It’s not news that we don’t see many Latinos on movie screens, even though the 2010 U.S. Census announced that more than 50 million of us live in this country and that we command $1 trillion in buying power. 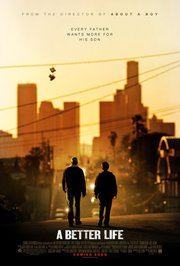 It took over twenty years to make A Better Life. However, if the movie does not have a strong turnout in only two movie theaters in Los Angeles and two theaters in New York on June 24,th the mainstream media will once again conclude that there’s no need to make films about Latinos, because Latinos don’t watch them.

That would be a big mistake. Because while Latinos may not appear on the big screen very often, we are packing in movie houses. In fact, according to the Motion Picture Association of America, 43 million Latino moviegoers purchased 351 million movie tickets in North America in 2010. That’s a $2.7 billion market.

Even more impressive, Latinos are the most frequent moviegoers on a per capita basis. We average seven trips to the movies a year, compared to four trips for other ethnic groups. And its certain those numbers will increase when you consider that, by 2020, Latinos are expected to represent close to 25 percent of the country’s population aged 18-to-29.

So after seeing a beautiful film tell a simple but universal story of a hardworking immigrant wanting a better life for his son, I left the theater with feelings of nostalgia and gratitude. Immediately I thought about the sacrifices my parents, Alfonso and Rosamaria, made when they came to this country in the 1970s to work in a factory and clean houses.

I thought about how fortunate I was to be given the same gift — the chance for a better
life.

I also left the theater wanting to learn more about the project and to tell others about it. And for the past few weeks, I’ve reached out to friends working at national Latino organizations and social media outlets, organized screenings of the movie trailer, and handed out flyers at Latino events to get butts in seats at the ArcLight Hollywood, Landmark theaters in LA and at the AMC Lincoln Square and Landmark Sunshine theaters in New York on June 24th.

Originally called The Gardner, the script has been circulating in Hollywood since 1989. The film stars Demián Bichir, one of the biggest stars in Mexico. Shot in East Los Angeles, in 69 locations for over 38 days, A Better Life reminds me of the landmark film, Robert M. Young’s Alambrista! (1977), that launched the career of Edward James Olmos.

The same effort was made by the director and producers to work closely with the local community to ensure authenticity. The director, Chris Weitz, is the grandson of famous Mexican actress Lupita Tovar. He says about his movie: “Part of my reason for making this movie was as a tribute to her because there’s a part of my family that’s Mexican…so part of my prep for the movie was to begin to learn Spanish, which I’m still doing.”

Even without knowing the movie’s backstory, A Better Life is a tribute to an invisible community of the many hard-working Latino immigrants who want only what all Americans want–a better life. It’s the same story shared by German, Irish, and Italian immigrants not so long ago.

The movie communicated to me a message of dignity and respect that we have been longing for and one that’s desperately needed in this anti-immigrant environment.

A Better Life is one of the rare movies that depicts Latinos and all immigrants with authenticity and humanity, and will have you remembering when and where you saw it.

It’s taken over twenty years for A Better Life. Which is just about the same amount of time that it’s taken our community to be taken seriously. The movie’s success or failure hinges on only a few weeks of limited release.

It’s time to take action. Latinos: A better life awaits us. Let’s get the word out!

Miguel Orozco is President of Nueva Vista Media and a member of the National Association of Latino Independent Producers. He co-founded Novelas Educativas – an award-winning, educational film company based in Burbank, CA.

Previous Post Guest Voz: It's time for Latinos to rally to the defense of Head Start
Next PostJust how long can Sen. McCain hold a grudge against Latinos?

Guest Voz: It's time for Latinos to rally to the defense of Head Start
Comment
Just how long can Sen. McCain hold a grudge against Latinos?