Rilla Askew is an Oklahoma author with a heart of gold and a way with a story. Her latest novel, Kind of Kin, places an Oklahoma family at the center of the vortex that was unleashed with the implementation of harsh immigration laws that foreshadowed harsher laws in Arizona and other states. 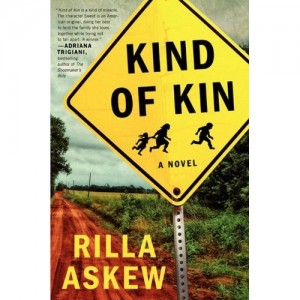 Robert John Brown, an ornery local farmer who has found religion and a conscience has been busted for hiding undocumented workers from the chicken processing plant in his barn. This sets off a chain of events that has a profound effect on his family and community.

The narrative is told from the perspective of four characters.

Her seven-year-old nephew, Dustin, tells his side of the story in the voice of a lonely little boy whose world is turned upside down by grown-ups’ senseless actions. Dustin forms a bond with Luis, one of the workers who eluded capture, overcoming the language barrier in an effort to help Luis re-unite with his family while Dustin’s falls apart.

Monica Moorehouse is the character whose voice provides the legislative context as a carpetbagger legislator riding the anti-immigrant tide to fame and, she hopes, higher office. She is a woman who is out of touch with the real life consequences of the legislation and, indeed, ends up losing her best friend, her gay hairdresser, over it.

Askew deftly weaves these storylines together to create an engaging read placing characters in situations that make them and thus the reader question previously held assumptions – how can a Christian break the law?

Must Christians break laws that are morally wrong? What constitutes a family?

This is the best tradition of art with a conscience providing no easy answers and not everyone gets a happy ending. By portraying human beings in an untenable and inhuman situation, Askew forces readers to grapple with the real consequences of harsh legislation.