New social media report could be blueprint for 2012 Latino outreach

LatinaLista — A long known profile characteristic of Latinos is that we are a very social people. So, it only makes sense that when it comes to social media Latinos have embraced it wholeheartedly. 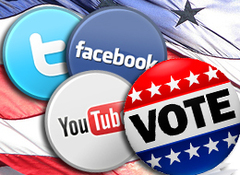 For example, 54 percent of Latinos regularly use Facebook compared to 43 percent of white Americans, according to statistics supplied by Social Media Spanish.

A recent report by the Pew Research Center’s Internet & American Life Project found that Latinos outnumber other groups in the use of Twitter — 5 percent for whites; 13 percent for blacks and 18 percent among Latinos.

And when it comes to the latest social media platform known as “location-based” services, Latinos, again, make greater use of the platform with 10 percent of Latinos using it versus 3 percent of whites and 5 percent of blacks.

With so many Latinos using social media, it’s not surprising Latinos have become a major target audience. Now, a new report outlining how social media needs to be implemented in the 2012 presidential campaigns provides a perfect blueprint for Latino outreach.

The report ALL POLITICS IS SOCIAL: Social Media Engagement Will Decide Election 2012 by SocialVibe, a digital advertising technology company, found that

94 percent of social media users of voting age engaged by a political message watched the entire message, and 39 percent of these people went on to share it with an average of 130 friends online.

The report outlines five recommendations on effectively outreaching to potential voters via social media and the Internet.

I won’t go into detail of each recommendation since you can read the report, but given the statistics already of Latinos’ usage of social media, it’s natural to see the potential political candidates literally have at their fingertips to reach a very important voting bloc in 2012.

Of course, the true measure of success in any outreach is that the candidates have something to say that Latinos want to hear.

Previous Post Latino teens at higher risk of hearing loss among peers because of one (bad) habit
Next PostSpotlight Nonprofit: Replacing bruises with a "ROSE"

Latino teens at higher risk of hearing loss among peers because of one (bad) habit
Comment
Spotlight Nonprofit: Replacing bruises with a "ROSE"