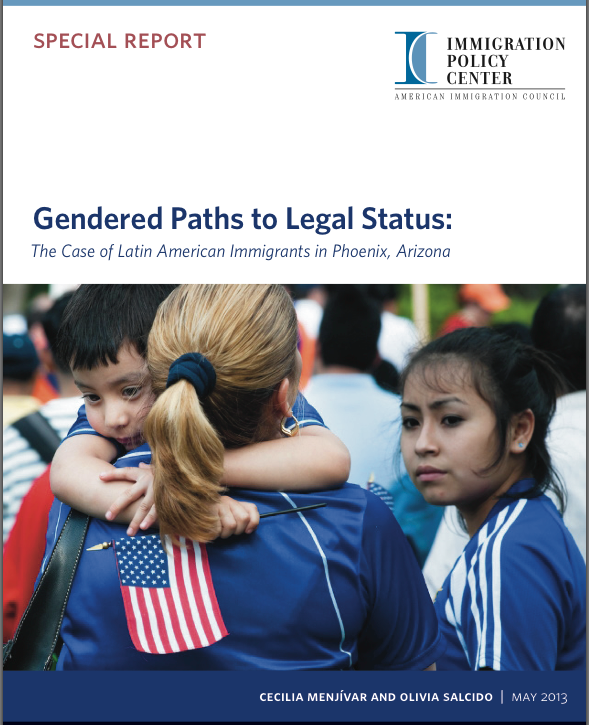 LatinaLista — A study 14 years in the making confirms that one sign of our nation’s broken immigration system is in its unequal treatment of immigrant women.

The new study Gendered Paths to Legal Status: The Case of Latin American Immigrants in Phoenix, Arizona, published by the American Immigration Council, found that the U.S. immigration process is disproportionately skewered towards men.

Conducting 51 in-depth interviews with immigrant women and men originally from Mexico, El Salvador, Guatemala, and Honduras in the Phoenix metropolitan area between 1998 and 2007, the report’s authors found that even when laws are written for the express purpose of protecting women, such as the Violence Against Women Act, they’re implemented along gender-biased lines.

Since the United States is considered the leading developed country in the Americas, it appears a contradiction that U.S. authorities would exercise unequal treatment between men and women immigrating into the U.S. Yet, the authors found that such gender bias is systemic to the immigration system, especially in cases of employment-based visas.

Though this year, Pew Research released a report finding that women were the main breadwinners or sole source of income in 40 percent of all U.S. households with children under the age of 18, the cultural prejudice of this country still expects women of Latin America to be socially behind their US counterparts due to stereotype beliefs.

Yet, a 2012 report from the World Bank titled The Effect of Women’s Economic Power in Latin America and the Caribbean found that Latin American women have been steadily joining the labor market in their countries, an increase of 15 percent from 2000 to 2010.

The report also reveals there exists a “small but seemingly growing number of households in the region in which women are the only breadwinners (17 percent overall; 19 percent in urban areas).” Hardly the image that reconciles with the stereotypical notion that Latina immigrants are dependent on their husbands.

For example, a woman who fears persecution based on political activities that have been defined by her gender (such as providing shelter for guerrillas, cooking, and hiding ammunition) may have a more difficult time proving that it is reasonable to fear persecution for engaging in these activities than a male who has engaged in what are believed to be male activities (such as leafleting, ambushing, shooting, demonstrating, or joining a guerrilla army). Thus, convincing decision-makers that political actions and opinions constitute a threat remains a challenge for women seeking asylum.

Overall, the biased expectation leveraged against immigrant women in their quest to gain legal status in the United States by the nation’s immigration system is creating challenges unique to women, and in many cases, undue hardship.

This bias extends to even the current immigration reform bill under debate in Congress.

According to the advocacy group, MomsRising, the immigration reform bill is moving so quickly through Congress that amendments attempting to correct the inequalities towards women immigrants may not have enough time to be added. Some of the amendments are:

Equality will always be a battle between the sexes but it shouldn’t be a factor for women trying to make a better life for themselves and their children.