Latina Lista: News from the Latinx perspective > Culture > Nielsen spells it out: Latinos are “not disappearing into the American melting pot”

Nielsen spells it out: Latinos are “not disappearing into the American melting pot”

LatinaLista — While most in the Latino community would complain that there are still some people — politicians, advertisers, etc. — who still don’t understand the potential influence Latinos will yield in the very near future, if not already, it’s not because reports aren’t being published highlighting this new reality. 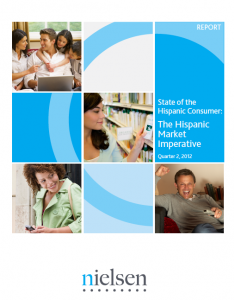 They are. The latest report is by Nielsen titled State of the Hispanic Consumer: The Hispanic Market Imperative report.

Nielsen admits that thier findings are not new or surprising but for those who think “Latino influence” is a lot of hype in a political campaign season, the report’s authors advise those people to think again. According to the report,there are some basic undeniable, irrefutable facts about the Latino community and what it means for businesses and the nation:

The report repeats what economists project for the Latino population — that Latinos will reach a buying power of $1.5 trillion by 2015 and because of that can’t be seen anymore as a sub-segment of the economy but rather a “prominent player in all aspects of American life.”

It’s an economic role that the report’s authors believe has already arrived:

If it were a standalone country, the U.S. Hispanic market buying power would make it one of the top twenty economies in the world. What’s more, the per capita income of U.S. Hispanics is higher than any one of the highly coveted BRIC countries (Brazil, Russia, India, China). Despite the recession, U.S. Latino households that earn $50,000 or more are growing at a faster rate than total households.

Also, as the report highlights, Latinos have already achieved some other interesting distinctions:

Mexican Ancestry is bigger than Irish, English or Italian ancestry in the U.S.

Beverage sales trends show powerful evidence of Hispanic consumers acting as the accelerators for growing categories and the brakes for declining ones.

Hispanics tend to shop less often, but spend more per trip, and are less likely to buy products at promotional prices.

Each of these findings reflects, if you will, a shared trait among all Latinos. But it’s the part about language that raises red flags.

The report’s authors say that “Latinos like ads 51 percent more if viewed in Spanish rather than English.”

The report’s authors further advise that the best way to reach the Latino market is via Spanish.

It’s a point that raises an interesting debate that has existed within the Latino community for sometime and is the proverbial “elefante in the room.”

Suffice it to say that while Latinos here in the US share a good many common traits that can instantly bond Latinos from different “home” countries, there is also an emergence of a new type of Latino that doesn’t necessarily claim Mexico, Cuba, Colombia, etc. as a reason for their “Latino-ness,” but accepts the fact that they are Latinos “born in the USA.”