Once blamed for the housing bust, Latinos now looked at saving housing industry

LatinaLista — It’s rather ironic that Latinos, who were blamed for the nation’s housing bust, are now being heralded as the ones who will save the industry from its demise. 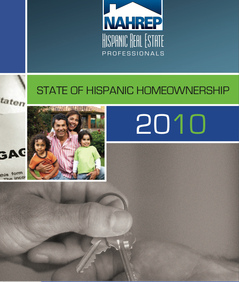 A new report State of Hispanic Homeownership by the National Association of Hispanic Real Estate Professionals shows that if it were not for the gains in the Latino population and their income levels, the housing industry would have a much harder time recovering, if they ever could.

Minorities and immigrants are expected to drive growth in housing demand because of their population size, age and greater propensity to be married with children. Within the next 15 years, they are expected to drive demand for condominiums, smaller starter homes and first trade-up homes. They are also expected to represent a rapidly growing segment of the middle and middle-upper markets for housing.

The report underscores the value Latinos place on owning their own homes:

74 percent of Hispanics said that owning a home is a good way to build up wealth that can be passed along to their families, compared to 59 percent of all Americans, and;

57 percent of Hispanics consider owning a home a symbol of success, compared to only 33 percent of all Americans.

The report cites that there are 700,000 Latinos at imminent risk of foreclosure. The report calls for even more reform in the home lending industry ranging from changing how loans are modified before foreclosure become necessary to easing restrictive lending practices that are making it extremely difficult for all people to realize their dream of owning a home.

Although it is generally assumed that racial discrimination has decreased in mainstream America, institutional discrimination in the past had substantially hampered the social and economic advancement of multicultural communities. Consequently, several residual effects of such discrimination still exist today.