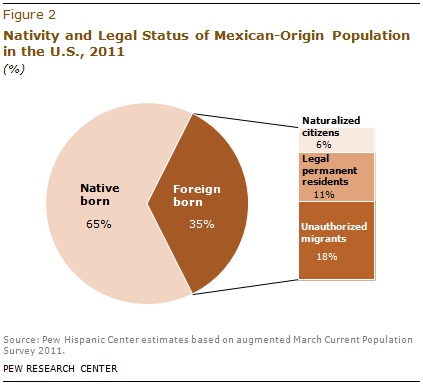 LatinaLista — There’s a reason that nonLatinos think every Latino in the United States is from Mexico. 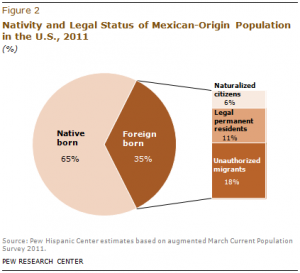 It’s because there are 34 million Latinos of Mexican origin living in the United States, and according to the Pew Hispanic Center, that is 64 percent of the overall Latino population.

It’s a huge chunk of the Latino population that nowadays is growing not because of immigration but because of being born in the U.S.

It makes sense that the U.S. would be the first choice for Mexican immigrants. After all, the U.S. is the only country on Mexico’s borders whose economy is doing fairly well, and free, for the most part, from systemic political and law enforcement corruption that cheats, intimidates and physically harms people who cross their paths.

As with any large group of immigrants to a country, there is good news and not-so-good news:

Mexican-origin Hispanics are younger than both the U.S. population and Hispanics overall. The median age of Mexicans is 25; the median ages of the U.S. population and all Hispanics are 37 and 27, respectively. U.S.-born Mexicans are considerably younger than their foreign-born counterparts. The median age of native-born Mexicans is 17, compared with 38 of the foreign born. — Good news since the population of the United States, like that of Western Europe, is getting grayer and the country needs a young generation to carry it forward.

Among those ages 15 and older, Mexican immigrants are more likely than native-born Mexicans to be married—58% vs. 34% respectively. As a group, Mexican-origin Hispanics ages 15 and older are slightly more likely (45%) to be married than Hispanics overall (43%). Good news considering all the research that has shown that children born into a two-parent family have better outcomes in life.

Mexicans born in the U.S. are almost three times more likely to have earned a bachelor’s degree than those born in Mexico—15% vs. 6% respectively. About six-in-ten Mexican immigrants have not earned a high school diploma (59%), compared with 21% of Mexicans born in the U.S. Bad news that so few Mexican immigrants have even a high school diploma. It doesn’t just impact their level of skills to perform work in an era of technology but the lack of schooling can also impact family attitudes towards higher education.

More than half (57%) of Mexican immigrants are uninsured, compared with 20% of those born in the U.S. Bad news. The expectation that it’s ok to let undocumented immigrants suffer with medical conditions rather than enabling them to access health coverage is inhumane and ends up costing U.S. society more through lost productivity, whether they’re on the books or not, and higher hospital costs, since hospitals pass along their losses when treating uninsured patients. By the time the uninsured can’t stand the suffering anymore, they most always end up racking up more expensive treatments because they have waited until they need acute care.

There’s a simple remedy to end these disparities but it’s no longer leadership that will make a difference on this issue — but having a conscience to do what is right.